Boston, MA – 2018 Ohio Valley Conference Coach of the Year Matt Figger [1] has been named a finalist for the 2018 Hugh Durham National Coach of the Year Award, presented annually by CollegeInsider.com to the nation’s top mid-major coach. 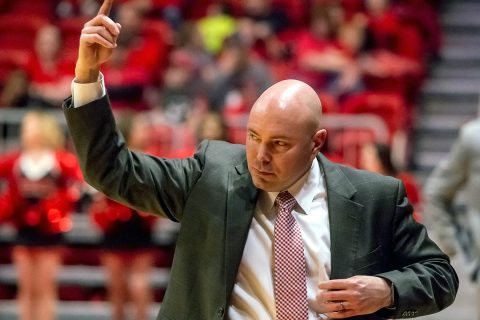 With a 19-15 overall mark in his first season, including a 12-6 record in league play which granted the Govs the No. 3 overall seed and a bye to the quarterfinals of the OVC Tournament, Figger was the fourth head coach in Austin Peay history to take OVC Coach of the Year honors, joining George Fisher (1966-67), Lake Kelly (1972-73) and five-time honoree Dave Loos, who was the only other APSU head coach to gain league Coach of the Year in his first season (1990-91).

Figger, a Jenkins, Kentucky native also was the first OVC coach to earn Coach of the Year honors in his first season at the helm since Steve Prohm (Murray State, 2011-12).

Under Figger’s tutelage, the Governors made one of the NCAA’s largest defensive turnarounds this season; Austin Peay went from allowing 83.8 points per game (ppg) last season to 71.9 ppg in 2017-18, with the -11.9 ppg the second-largest drop in points per game in the nation behind only Central Michigan (-16.1 ppg). One of those single-game milestones included holding Alabama A&M to 47 points on December 2nd—the first time APSU held an opponent below 50 points since Brescia in 2010 and the first Division I foe the Govs held below 50 since 2008 against Samford.

The Govs under Figger were a pesky defensive unit, winning the turnover margin by double-digits on three occasions and forcing an average of 23.6 turnovers per game from November 16th (Oakland City) to December 6th (Illinois). And when injuries and illness took a toll, Figger proved he could do more with less, winning late-January contests against Eastern Kentucky and Morehead State despite dressing just nine players, as well as contests in the OVC Tournament and the CIT.

About the Hugh Durham National Coach of the Year Award

In eight seasons as the head coach at Jacksonville University, Durham became the Dolphins’ all-time winningest Division I coach (106 wins), making him the only coach in NCAA history to be the winningest coach (pct. or wins) at three different Division I schools.

He built national programs at Florida State where he holds the record for best winning percentage with a 230-95 (.708) record in 12 years. And at Georgia where he is also the all-time winningest coach in the 99-year history of the Bulldog program, having won 297 games in 17 seasons.

The recipient of the 2018 Hugh Durham Mid-Major Coach of the Year award will be announced Monday in San Antonio, site of the Men’s NCAA Basketball Championship.