Dickson, TN – Special Agents from the Tennessee Bureau of Investigation have arrested and charged a Dickson woman in connection to the ongoing investigation into the death Wednesday morning May 30th, 2018 of a deputy of the Dickson County Sheriff’s Department.

At the request of 23rd District Attorney General Ray Crouch, TBI Special Agents, working jointly with multiple other local, state, and federal agencies, continue to investigate the circumstances that led to the on-duty homicide of Dickson County Sergeant Daniel Baker.

During the course of the investigation, authorities developed information that Erika Castro-Miles (DOB 9-5-79) participated in the incident.

This Wednesday evening, Agents charged Castro-Miles, detained in the early stages of the investigation, with one count of First Degree Murder.

At the time of this release, she remained in the custody of the Dickson County Jail.

An additional person-of-interest in Sgt. Baker’s death, Steven Joshua Wiggins (an acquaintance of Castro-Miles), remains at-large and should be considered armed and dangerous. Wiggins remains the subject of a Tennessee Blue Alert and has also been added to the state’s Top 10 Most Wanted list. 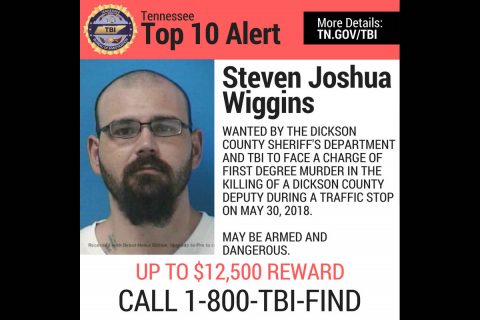 There is currently a reward of up to $7,500 for information leading to his arrest.

More information and pictures of Wiggins can be found on the TBI’s website at www.tn.gov/tbi