Clarksville, TN – After posting back-to-back wins versus national-ranked opponents in its last two contests, the Austin Peay State University (APSU) football team needs to watch out for a potential trap game situation this coming Saturday, October 19th, in Nashville, TN, as the Governors face a Tennessee State team playing with nothing to lose on their homecoming. 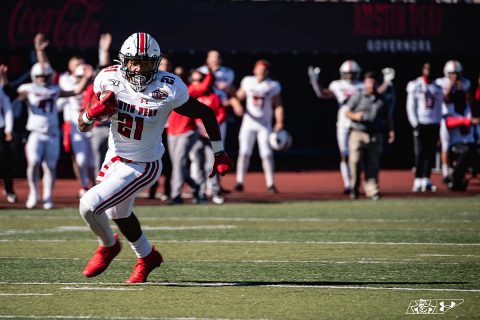 Austin Peay State University is currently 4-2 overall this season, but importantly 2-0 in Ohio Valley Conference play, after beating then #11 nationally-ranked Jacksonville State, 52-33, on September 28th and #20-ranked Southeast Missouri this past Saturday, 28-24, but now face a Tennessee State who was picked to finish right behind the Govs in the league’s pre-season poll, but are currently 1-6 this season, including a 0-3 mark in OVC play.

This would make it very easy to overlook a very talented, but so far this season a under achieving Tigers squad, who have lost their last six games by an average of just over 13 points per contest.

But then you add the facts that coming into this week’s contest the APSU Govs should be nationally ranked for the first time this season, it’s Tennessee State’s homecoming – being played at the Tennessee Titans home field, Nissan Stadium – and is the final contest before facing the surprise team in the OVC this season, Tennessee Tech on the road, followed by a trip to Eastern Kentucky – the only other conference team on their schedule that was picked to finish higher than the Govs in the conference’s pre-season poll.

And that’s not even taking into consideration that the Governors and Tigers are 6-6 in their last 12 meeting, with eight of the 12 games having final margins of four-points or less, along with will APSU’s leading rusher this season, Kentel Williams – who is averaging 100.8 yards per game and 5.8 yards per carry – play this week after sitting out the SEMO game with a lower-body injury.

You can add all those things anyway you want too, but to me it spells TRAP GAME for the Governors.

But if the Govs come in focused on the Tigers and not looking down the road to the next two or three weeks, continue to play like they have in stopping the Tigers run game, slow the TSU passing attack – which averages almost 40 pass attempts a game – continue to force turnovers (Govs are +7 this season in giveaways-takeaways, while TSU is -9) and hopefully get Williams back healthy in the backfield the Govs should come away with their third straight win overall, a third straight in the all-time series, but most importantly remain undefeated in OVC play.