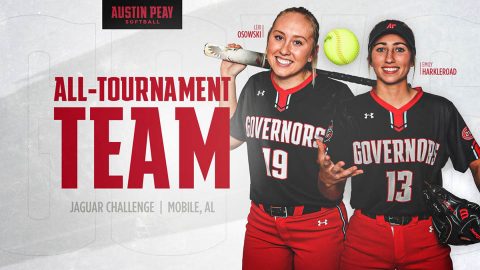 Harkleroad, a redshirt sophomore utility player from Hixson, Tennessee, batted .462 for the weekend, going 6-for-13 at the plate, with two runs scored, three RBIs and a stolen base.

She also pitched an inning in relief in the team’s 4-2 tournament-opening win versus Evansville.

Osowski, a sophomore third baseman from San Diego, California, led the team in hitting during the tournament, with a .533 batting average, going 8-for-15 at the plate, including three doubles. She also scored four runs and drove in two, highlighted by a walk-off game winner in the Governors 3-2 come-from-behind win versus Louisiana Tech.