The first match of the 2020 season will be against North Alabama 8:30am, Friday, followed by a match against Hendrix later, Friday. The Govs will face Park University and host Central Arkansas, Saturday. 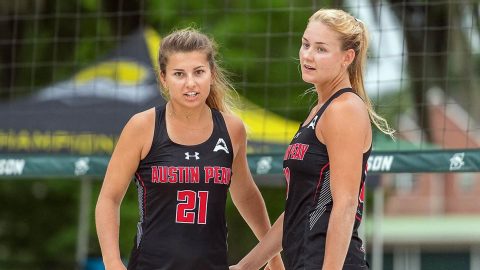 Five of the fourteen players on the rosters will be touching the sandy courts for the first time in their collegiate careers.

“Watching and analyzing from the veterans on the team,” said Mott. “This sport is more of a thinking game and noticing tendencies with your partner outside of where for indoor you have five others and control a general area. I think the best way for the young ladies to excel is to watch their teammates and add certain things that will best fit them.”

Thoughts from senior class
“The primary goal this year is definitely to be the first team to win an OVC Beach Volleyball championship,” said senior MiMi Arrington [1]. “We also want to finish out the season with a winning record. Every year we have improved, and last year we finished with an even record. The goal for myself this season is to play with confidence and utilize the skills I have been taught by my coaches these past three years.”

“This season is exciting because we are back in the OVC and get to compete in the sand against some of the teams we play indoors,” said senior Jenna Panning [2]. “The goals of this season are to keep getting better every chance we have and to win a conference championship. A personal goal that I have is to stay positive no matter the outcome and to be competitive in every match that I play. I am excited for the season to get started finally.”

Series History
The Govs first match of the season will be against North Alabama, a team they faced last season and split a pair of matches, including a 3-2 comeback victory in Clarksville. Central Arkansas has faced the Govs each season. Austin Peay State University took the last matchup in 2019, 3-2, after dropping the previous four matches between the two teams. This weekend will be the first time Hendrix or Park University will face the Govs.

Govs join OVC for first time
Austin Peay State University will join the Ohio Valley Conference for the first time in its young program history and will face five OVC teams starting in their home meet March 21st vs. Eastern Kentucky. They will face all five OVC teams at least twice this season before heading into the OVC Beach Volleyball Championships in April. The Govs was formerly in the ASUN conference last season, where they finished 4-4.

Seniors to the End
Seniors MiMi Arrington [1] and Jenna Panning [2] will be the first Govs to play four seasons as members of the beach volleyball program, which is in its fourth season.

For the latest updates on the Austin Peay State University beach volleyball team, follow their Twitter page @AustinPeayBVB as the Govs kick off their 2020 season at the UCA Beach Tournament.