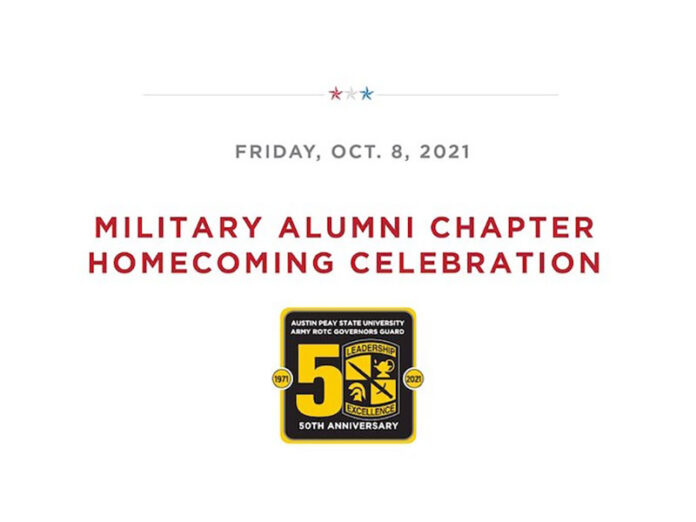 The dinner also will serve as one of the many celebrations for the APSU Army ROTC Governors Guard’s 50th anniversary that are taking place throughout the 2021-2022 academic year. Fortera Credit Union is the presenting sponsor for the event.

“APSU Army ROTC would like to thank President (Mike) Licari and the University staff for their support of our program and this event,” Lt. Col. Mark Barton, APSU professor of military science, said. “We enjoy being part of the APSU team and this great campus. The Department of the Army General Order #4 established ROTC at APSU in 1971, and this fall, we are celebrating 50 years on the APSU campus.

“We currently have 134 cadets and students participating in the program,” Barton continued. “We are an eight-time McArthur Award winner (one of the eight best ROTC programs in the nation out of 274 universities), and our program has commissioned 837 cadets as second lieutenants into the Active Army, Army Reserve and National Guard in the last 50 years. APSU Army ROTC cadets continue a longstanding history of exceeding the standard in leadership, academics, physical fitness, university involvement and community engagement. Let’s go Peay!”

During the dinner, the 2021 APSU Govs Who Lead Through Military Service Award will be presented to Joe Shakeenab (’04, ’14), APSU Military Alumni Chapter president and APSU National Alumni Association president, by APSU Board of Trustees Chair Billy Atkins. ROTC alumni from various Fort Campbell groups will also be recognized.

Tickets for the dinner are $40.00 per person. Proceeds will benefit the Margaree King Richard Leader of Character Scholarship Endowment, named after the former APSU faculty member who will also serve as the keynote speaker for the event. John Montgomery and Robert Roof of the JR Group created the endowment. They both worked with Richard in her past role with the APSU Army ROTC Governors Guard.

Richard was born in Jackson, Mississippi, and attended Murrah High School. After graduating, she attended the United States Military Academy at West Point, where she was a member of the Division I Basketball 2006 NCAA Tournament qualifying team. She graduated in 2008 and earned West Point’s first Patriot League Defensive Player of the Year award.

After being commissioned, she completed Explosive Ordnance Disposal (EOD) school at Eglin Air Force Base and became the first-ever female African American officer bomb technician in the United States Army. Following an assignment to Joint Base Elmendorf-Richardson and a subsequent deployment, she was assigned to the 52nd EOD Group at Fort Campbell and became the Company Commander of the 723rd EOD Company supporting austere units in theater.


Richard was diagnosed with breast cancer while in command. She opted to continue her command to show fight and resolve, thus embodying the “Never Quit” attitude promoted by the Armed Services. She completed extensive chemotherapy over a six-month period and completed her command. After chemotherapy and leading her company on foreign and domestic ground, she was assigned to Austin Peay as an assistant professor of military science. Since completing service, Richard has been an assistant coach at the United States Military Academy at West Point, and she currently serves as the director of basketball operations at Howard University.

As she educated, trained and mentored cadets and students in the Clarksville area, Richard realized that future leaders need opportunities to show their capabilities. Her endowment provides assistance and incentives for cadets to maintain focus in a program filled with historic success. The academic and physical rigor of the Austin Peay ROTC program gives students the skills to apply procedures and techniques learned through critical thinking as army officers. The scholarship is just one of the many ways in which Richard is helping those in need to achieve success.

“We are honored to have a strong support base who believes in and promotes our mission – to build scholarship endowments for active duty service members, APSU ROTC cadets, veterans and their families,” Shakeenab said.

“The APSU Army ROTC Governors Guard is a vital program for our University,” APSU President Mike Licari said. “It provides many skills and opportunities for our students and strengthens our ties to Fort Campbell, our military-affiliated students and their families. Over the years, the program has brought much distinction and many awards to this University, and we are excited to honor those accomplishments at this dinner and throughout the year.”

To RSVP for the dinner by October 1st, visit alumni.apsu.edu/military21.

To support APSU fundraising initiatives, contact the Office of University Advancement at 931.221.7127.