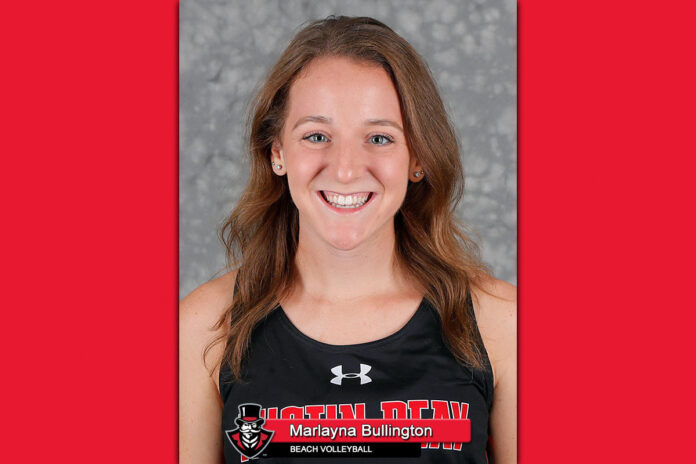 Brentwood, TN – The Austin Peay State University beach volleyball’s Marlayna Bullington was named the Ohio Valley Conference Player of the Year, with Bullington and her partner Kelsey Mead also being named the OVC Pair of the Year, the league announced Wednesday.

In addition, Bullington and Mead, along with the duo of Brooke Moore and Mikayla Powell, were named First Team All-OVC Pairs, while Demi McInnis and Tegan Seyring earned Second Team All-OVC honors.

Finally, the trio of head coach Taylor Mott, associate head coach Travis LeBlanc, and volunteer assistant Stephanie Spencer were named the OVC Coaching Staff of the Year after leading the Governors to the 2022 OVC Regular-Season Championship.

Bullington, who was the 2021 OVC Freshman of the Year, is the first Gov to be named the conference’s player of the year in program history. This season, Bullington and Mead went 20-8 overall – breaking the program’s single-season wins record – and 6-2 in conference play, with all but one of their wins coming on the No. 1 line.

Bullington’s .698 career winning percentage is the top mark in program history and Mead’s .667 mark is the second-best.

Moore and Powell posted a 19-9 record in their first season playing together, with all of their wins coming from the No. 2 position.

The tandem’s 19 wins is the second-best single-season mark in program history and also broke the previous record of 18 wins which was held by Jenna Panning and Haley Turner. A graduate from Louisville, Kentucky, Moore is the winningest player in Austin Peay history with 60 career victories and her .594 winning percentage is the third-best mark in program history.

With all of their action coming from the No. 3 position, McInnis and Seyring posted a 14-10 mark together in their first season as partners. McInnis also picked up two wins with another partner and her 16 wins is the fifth-best single-season mark in Austin Peay history, while Seyring’s 14 wins are the seventh-best total.

A record 18 wins and counting and the program’s first-ever regular-season title secured the coaching staff of the year award for Mott, LeBlanc, and Spencer. Under their tutelage, multiple pairs of Governors broke the single-season wins and winning percentage records this season.

It is the first time in program history that Austin Peay State University has received coaching staff of the year honors.

With the regular season in the books, Austin Peay is back in action at the OVC Beach Volleyball Championship, hosted by Morehead State, when it plays a 1:00pm match against Chattanooga at the Fazoli’s Breadstick Beach in Morehead, Kentucky.

At the completion of the regular season, the OVC announced that it had received automatic qualification for the 2022 NCAA National Collegiate Women’s Beach Volleyball Championship.

The winner of the OVC Tournament will receive a bid to the NCAA Tournament, which has been expanded to 16 teams and will be played May 6th-8th at the Gulf Beach Place in Gulf Shores, Alabama. The selections will be on April 30th at a to be determined time.