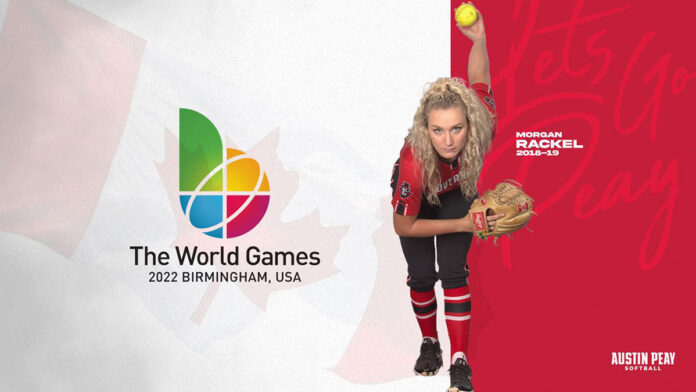 The 2018 Ohio Valley Conference Pitcher of the Year and a two-time First Team All-OVC recipient, Rackel served as an alternate for Team Canada’s bronze-medal finish in the 2021 Tokyo Summer Olympics. In 2019, Rackel helped lead Team Canada to a silver medal in the Pan America Games in Lima, Peru.

“Our team is very different than it was for the Olympics last year,” said Rackel. “I’m just embracing the new role. Last year, I was an alternate and this year I am the only returning pitcher. While it may be a little different from my side of things, anytime I am able to wear that maple leaf on my chest, it is a super proud moment.”

The Calgary, Alberta native played for the Governors in 2018-19, where she finished with the third-lowest career ERA (1.68) and the fourth-most wins (43) in program history, despite playing just two seasons.

Team Canada is currently 4-0 in games played this summer, having swept their competition at the Celebration Tour in Ontario in June.

Team Canada enters The World Games at No. 3 in the World Rankings and opens pool play against No. 6. Chinese Taipei in a Saturday game that starts at 10:00am before facing No. 7 Italy at the same time, Sunday.

Following their match against Italy, Team Canada faces No. 1 United States at 4:00pm, Monday – a game that Rackel has circled on her calendar.

“Facing the United States is always fun for us because we do have that North American rivalry,” said Rackel. “The US always has some of the big names from the big schools, while we have the mid-major players like myself, but we have the team chemistry that can take us far and we know that.”

The World Games Finals are on July 14th, at 7:00pm with the medal ceremony to follow.