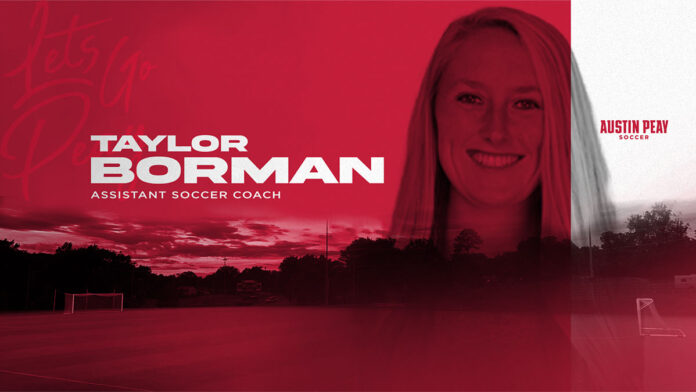 “I am thrilled to add Taylor to our staff,” said McGowan. “She has proven herself as a player, volunteer, and assistant coach. She brings a familiarity with the recruiting in our region, and I know her competitive energy will help this program get better.”

Borman spent the last two seasons (2020-21) at Georgia State as an assistant coach and recruiting coordinator under head coach Ed Joyce. During her time in Atlanta, the Panthers combined for a 19-7-9 record, including a 10-3-2 mark in 2020 – the most wins by the program since 1998.

In the 2020 season, Broman helped coach five student-athletes to All-Sun Belt Conference selections, the most in program history.

“I am excited to be joining the group here at Austin Peay State University,” said Borman. “I can’t wait to get going and get integrated with this team!”

Prior to her time at Georgia State, Borman spent two seasons (2018-19) at Alabama State as an assistant coach and recruiting coordinator under Jodie Smith. During her time in Montgomery, Alabama, the Hornets won 12 matches and had three players named to All-Southwestern Athletic  Conference teams.

Borman got her first assistant coaching position in 2017 at UNC Ashville where she worked with the Bulldogs’ offense, primarily the forwards.

During her playing career, Borman was a two-time First Team All-Southern Conference selection at Samford. She is third in career assists and eighth points in program history with 23 and 53, respectively.

In her junior season, Borman finished with the ninth-most assists in the country with 11 and was named to the SoCon All-Tournament team after helping lead Samford to the tournament semifinals.

A Georgetown, Kentucky native, Borman was a Kentucky Miss Soccer and Gatorade Player of the Year finalist as a senior at Scott County High School in 2012 after finishing with 32 goals and a state-record and national-best 46 assists.