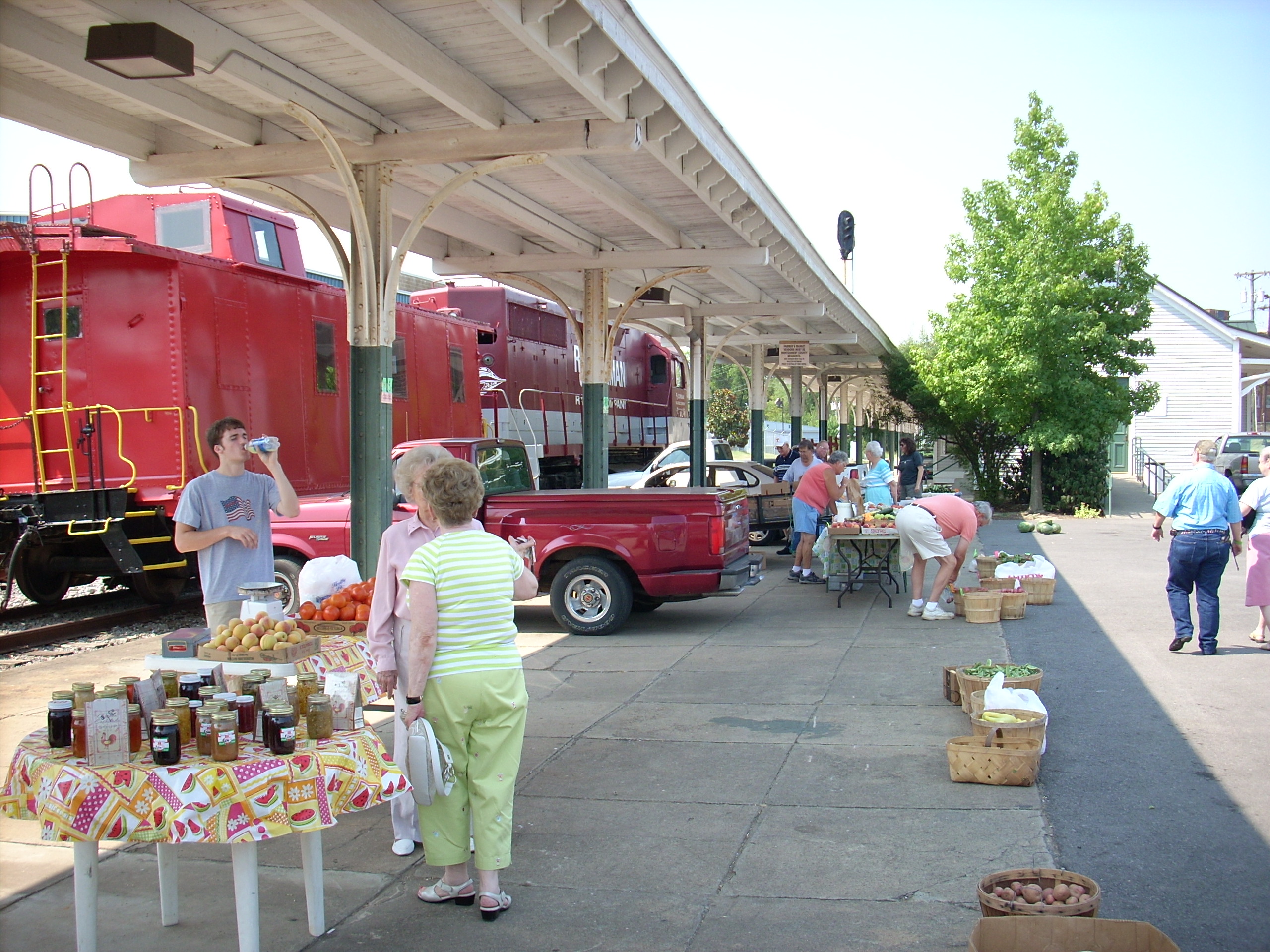 “Due to lack of rain and high temperatures, we are going to close this market for the season.”

Several of these hand-printed signs hung from vendor tables at Clarksville Farmer’s Market Saturday morning, a grim testament to the impact the current heat wave and the long-standing regional drought are having on farmers and the availability of fresh local produce.

A handful of vendors stood under the railroad station canopy on Tenth Street, offering a selection of summer squash and zucchini, red and green peppers, okra, red and sweet potatoes, baked good, preserves and homemade pickles, and plenty of fresh peaches and ripe red tomatoes. At 10:30 a.m., it was already about 90 degrees in the parking lot, in the sun.

Paulette Peterson, market organizer, said it is the first time the market has ever had to close this early. “It’s sad. But everything is drying up and dying. There’s not much left to sell.” 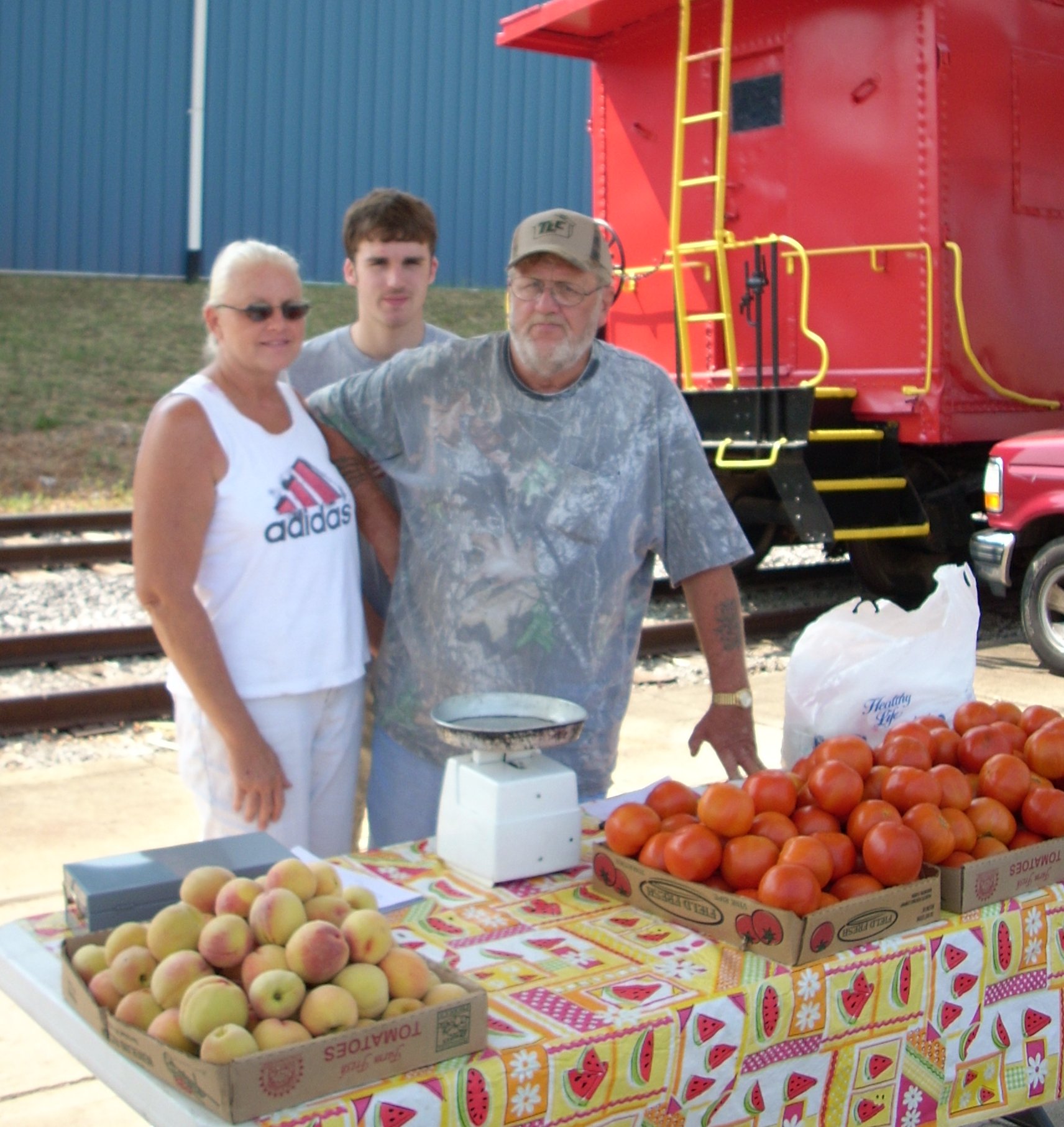 Retired car dealer Eddy Kingins has been working the farmer’s market since his retirement, selling produce he grows himself. (Pictured from left, Sherry Kingins, Cameron Taylor and Eddy Kingins)

“I was in the car business for 38 years,” Kingins said. “I retired, and started doing this.” He loves the work and the “people contact” that the market offers.

“But there’s been no rain. So everything is all dried up. Everything in my garden,” he said. He has attended the Amish farm auctions in the hopes of acquiring additonal produce there, “but the Amish [produce] is all dried up too.” When he can find fresh produce and tried to broker a deal, he finds that prices have skyrocketed.

Even if it rains for a week, it’s too late to save the season, he said. While most of the South is in a period of prolonged drought, that drought has hit “extreme” levels in middle and western Tennessee, destroying crops, killing trees, and creating a secondary danger of brush fires. With daytimes highs staying steadily above 90 degrees, and multiple days with highs in excess of 10o degrees, mid-state Tennessee is “cooked.” 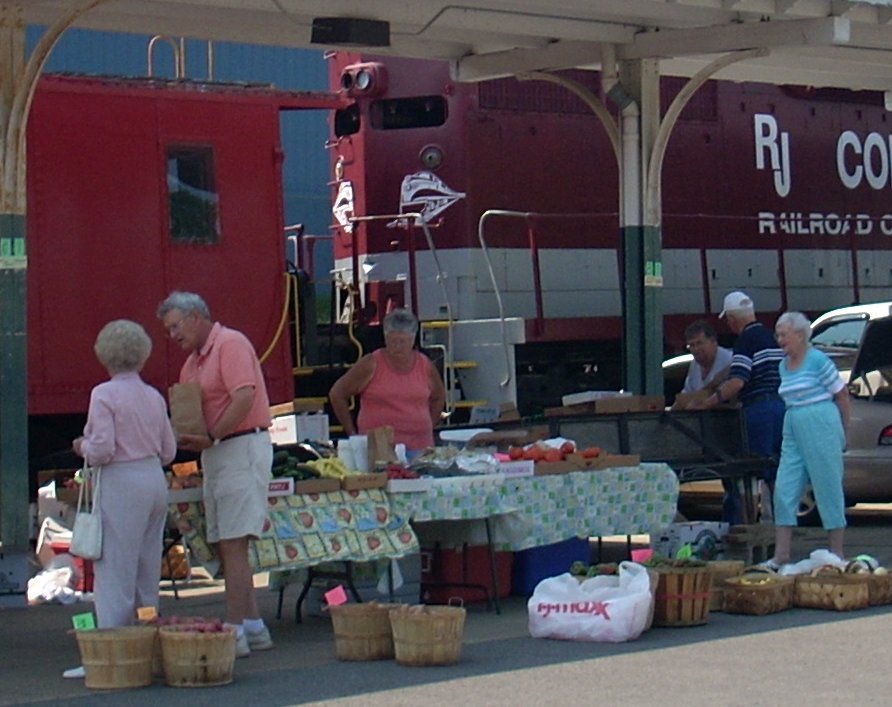 “Green beans that were selling for $14 a bushel are $32 a bushel not [at auction],” Kingins said. “Prices are sky high even at the Amish sale.” It leaves vendors such as the Kingins with nothing left to sell.

Kingins wife, Sherry, said the problem is not confined to the produce market. Farmers raising cattle for beef, along with dairy farmers, are facing staggering increases in the cost of hay and feed. “Milk and beef prices are going to go sky high” Sherry said. “Bales of feed hay that cost $15 or $20 dollars are going for $75 to a $100.” It will have a trickle down effect on the prices we pay for everything come fall and winter, she added.

So Kingins, Sherry and their grandson, Cameron Taylor, who helps out his grandparents “whenever I have the chance,” sit in the already warm shade, taking turns waiting on shoppers seeking out their vegetables, preserves and canned pickles, and saying goodbye to a summer sojourn that is ending too soon.

This morning at the railroad station, tables were set up at carefully numbers spaces. Vendors displayed bins and bushel baskets of what was left from their gardens, and conducted the market-fresh buying and selling for one last time this summer.

They are hoping for a better season next year.