APSU’s Summer Dance Concert is poetry in form and motion 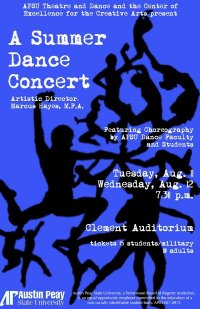 Dance is the noblest of the Arts. Using a human body as their canvas, a dancers’ performance treats the audience to a visual poetry written with their bodies in both form and motion. That is how I felt this evening when I watched the APSU Center of Excellence for the Creative Arts and the APSU Dance Program holding their Summer Dance Concert. One performance remains;  on Wednesday, August 12th, at 7:30PM, Clement Auditorium.

Followed by the lovely Brittany Hardaway performing a ballet called Gentle Lullaby to the sounds of Se Ymnumen by George Skaroulis. Many of the dancers held neutral expressions on their faces when they performed not so with Brittany. You could see her love and passion for dance etched on her face with every leap and pirouette.

Requiem for a Black Girl performed by Laquimah Van Dunk and Breanna Mandolene held an almost violent feel. To the background of Two women bound together by a cord barely seen. Lifting and pulling until they were free. At points hands were bound, Laquimah is strangled both with the cord, and bare hands. Eventually the performance ends with the two women laying on the floor like the dead.

Searching choreographed by Alaina Runions was one of my favorite numbers. Performed by two identically dressed lovely young women Caitlin Proctor and Abby Ramsey, who could have almost been sisters. Their dance was a dance of passion, almost that of two lovers.

Untitled: Work in Progress was the first dance of the evening to feature a male dancer Walter Riley Braem, he was assisted in this number by the Jennifer Whitcomb-Oliva and Breanna Mandolene. The thing that sticks out about this dance to me was the intricate hand movements and the runner who circled the other two dancers at times a male and at other times a female.

This was followed up by Rising Flame featuring Laquimah Van Dunk. In this sensual dance she indeed lit up the stage.

To forgive but not forget was the next number choreographed by Laquimah Van Dunk. Her sensuality again shined through the dancers. This number featured Walter again but he seemed to almost be shunned by the other dancers, outshone even. The ladies including Alaina, Jennifer, Abby Ramsey, Brittany, and Arlene Reed exhibited an almost feminist power to their dance ending up with the women flexing in poses of aggression as Walter lay on the ground.

Day was a performance by the other male in the program, Kevin Loveland. The sensation I felt was of an individual attempting to deal with depression and while they almost succeeded, they were eventually pulled down again.

, the dance was graceful and full of energy. The five women ran, leaped, spun, and seemingly flew through the air.

In the soloist I got the impression of a soldier coming home after making the ultimate sacrifice for their country. Others may have taken something else but from the way she carried the guitar on her shoulder like a pall bearer, the stickers (War is not the answer, A Red, White, and Blue peace sign, and John Lennon featuring Imagine all the people living life in peace) on the guitar, and the lyrics that’s the impression I received. Any way as a Veteran, I liked it. Too often people forget the true cost of war. Thanks Alaina for reminding us!

MangO was the next number, choreographed by Jennifer, and performed by her and Caitlin. The number was also very sensual, and would have quite possibly been in my list of favorite numbers if it was not for the lack of emotion displayed on Jennifer’s face during this performance. I really hate to give bad reviews but if you don’t know it’s broke, you can’t fix it. You have the technical side down pat, but you got to put your heart into your dance and let the audience see either from the emotion or intensity on your face, that you really feel it.

The final number was Red Light. Featuring the upbeat song Roxanne by the Police. Danced by Abby, Alaina, and Laquimah. These women really can strut their stuff!! They put a lot of energy into this dance, and it paid off for them.

This was a great performance, and I really enjoyed it. You should definitely try to make the final show tomorrow night!

Clarksville’s Downtown Market has something for everyone