The Native Cultural Circle closed out their 12th Annual Intertribal Powwow Sunday. The Powwow showcases the culture, heritage, and traditions of all Native Americans. The Powwow opened Saturday morning with the third annual Trail of Tears Memorial Walk.

The walk remembers the plight of the Native Americans forced from their ancestral homes to the Indian territory in what became the State of Oklahoma. Diary records of the removal mentioned Port Royal, the last stop before leaving Tennessee, as an encampment site where the Cherokee stayed to re-supply, grind corn and rest. Hundreds of Cherokee died during their trip west, and thousands more perished as a consequence of relocation. 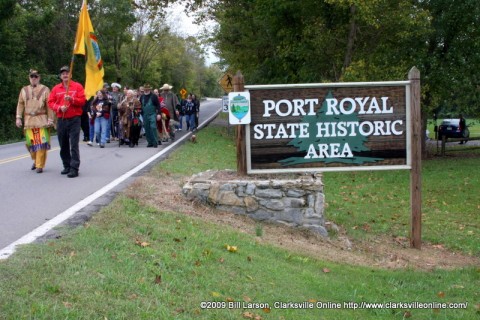 Attendance this year was somewhat lower than expected most likely due to the cold wet weather on Saturday, but it picked up with the warm sunny weather on Sunday. NCC Treasurer Philenese Slaughter said “Everyone who attended had a wonderful time.” she had especially glowing praise for the Hawaii O Tenesi Hawaiian Civic Club who preformed on Saturday, “The Hawaiian dancers added a lot, and are wonderful. I want to thank them for coming out and sharing their culture with the mainland Indians.”

Part of the Grand Entry ceremony that opens the Powwow each day is giving special recognition to the Active duty soldiers, and Veterans from all branches of the Military that are present. One of those recognized was John Clark who fought in the United States Army in the Pacific theater of operations during World War II. He celebrated his 91st birthday at the Powwow this year. John was accompanied by his daughter who was also a retired army veteran. The Women Veterans of America had a booth at the Powwow providing information about their organization to the attendees.

The Head lady this year was supposed to be Jill Smith, but she became ill a day before the Powwow began, and was sent home to recover. The head man was Chris Crosby. Faron Weeks the Master of Ceremony. Charles Page served as the Head Vet. Shawn Longfeather as the arena master. The Powwow Princess was Christa Koontz. The host drum was The White Horse Singers from Alabama. The guest drum was Southern Echo which hales from East Tennessee.

The Powwow showcased the best of Native American culture, and in doing so reminded us all of the heritage of this great land that we all call home. And since in Tennessee October is “Native American Indian Month,” the Powwow was a great way to celebrate it.