MOREHEAD, KY – The final nine and a half minutes of the first half proved to be the fatal moments as Austin Peay State University women’s basketball team dropped its sixth-straight contest with a 79-56 Ohio Valley Conference loss at Morehead State, Saturday night, at Johnson Arena.

Austin Peay (3-11, 2-1 OVC) kept the game close throughout the opening 11 minutes, grabbing the lead twice and forcing one tie. After Austin Peay grabbed its last lead, 12-11, with 13:01 remaining, Morehead State used a 9-2 run to build what was then its largest lead, 20-14, with 10:39 left. The Lady Govs battled back with the next four points and closed within two points, 20-18, at the 9:33 mark after freshman Meghan Bussabarger made one of her two free throws. 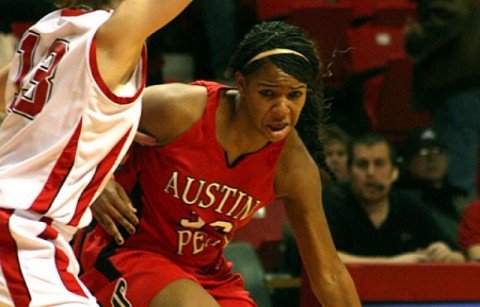 But from there, Austin Peay’s offense went stagnant making just 2 of its final 11 field goal attempts in the half, including missing all three of its three-point attempts. Adding to their woes, the Lady Govs committed seven turnovers, including a stretch of three straight miscues.

Austin Peay opened the second half with a 6-2 run to cut the lead to 13 points with 16:44 remaining, but would get no closer. Morehead State scored 10 of the next 13 points to build a 20-point, 52-32, advantage three minutes later and did not look back.

The Lady Govs defense saw its struggles continue as Morehead State made 41.4 percent (29-of-70) of its field goals, including 44.4 percent (12-of-27) of its three-point field goal tries. Austin Peay also could not force any turnovers, Morehead State committing just 10 miscues against APSU’s 19 turnovers.