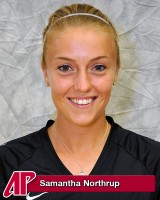 Northrup has played the past three seasons in the center midfield for the Lady Govs, but recently has made the move to defense after injuries depleted the defensive corps. Playing alongside veteran senior defender Hannah Jones, Northrup had no trouble with the transition.

“This is well-deserved recognition for Samantha,” head coach Kelley Guth said. “Due to injury, we have had to make the adjustment of moving Sam from the midfield into the center back position after losing Sara Kluttz earlier this year to a knee injury. Sam has really stepped up and done a tremendous job in this role and this recognition is a credit to her contribution to our team’s defensive efforts so far this season.”

In the past week, Northrup guided the defense to a pair of shutouts, Tuesday against Alabama A&M and Sunday against Valparaiso. The Crusaders came to Austin Peay with a 1-0 win against OVC team Eastern Illinois and a tie against Eastern Kentucky. The Lady Govs defense limited Valparaiso to only five shots and two on goal.

Northrup’s contributions included playing both complete games for the Lady Govs and placing her only shot on goal against Valparaiso.

The Austin Peay defense has been no slouch this season. The Lady Govs have allowed goals in only two games, with all eight wins coming in shutout fashion. Opponents have managed only seven goals on 41 shots.