TDOT’s Environmental Initiatives Leave a Legacy for the Future

Last week, TDOT opened a new section of State Route 840, the highway that makes a half circle south of Nashville connecting I-40, I-65, and I-24. While the entire State Route 840 is not yet complete, this particular project is symbolic of the dramatic changes TDOT has implemented over the last several years in an effort to become better stewards of the environment. While many of those changes were focused on actual road construction, we have also seen monumental improvements in virtually every aspect of the department’s work.

The controversy over the last sections of SR 840 led to the launch of the Context Sensitive Solutions process, which forms valuable partnerships between TDOT and the citizens of Tennessee. CSS is now being used on a number of large projects across the state. The department has also strengthened its entire public involvement process to ensure our citizens are informed and educated throughout all phases of project development. The result – projects that complement communities; and include the input of residents and stakeholders, as well as adherence to environmental protection measures. 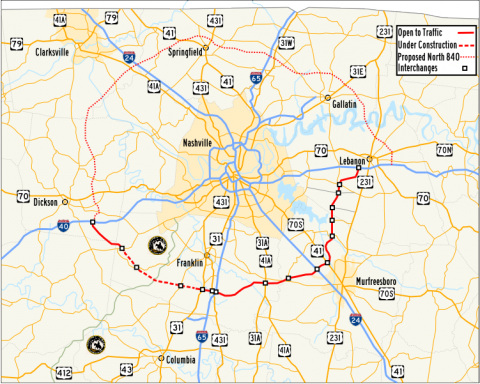 TDOT’s environmental efforts extend much further than road projects. As an agency, it is our responsibility to maximize the efficiency of our existing transportation system, while minimizing its impacts to the environment. The improvements we continue to make to our bike and pedestrian programs are providing Tennesseans with viable choices in transportation, and have the ability to reduce congestion and improve air quality. With the launch of the TN Smart Commute website, we’re also offering a comprehensive clearing-house of commuting information on walking, biking, passenger rail, public transit and ride sharing.

Our commitment to the environment also includes a focus on promoting the efficient use of natural resources, including alternative fuels like biodiesel and ethanol.  TDOT is providing to financial assistance to fuel station owners and farmer co-ops to the availability of these alternative fuels to the public. We’ve also made a pledge to reduce TDOT’s fuel consumption and have installed ethanol pumps at each of our regional offices for use in our large fleet of vehicles.

Greater environmental successes can certainly be achieved when state agencies work together towards a common goal. TDOT has made great strides in this area with the implementation of the Tennessee Environmental Streamlining Act, which establishes a coordinated planning and project development process for TDOT and relevant regulatory agencies. This multi-agency agreement helps identify and resolve issues in the early stages of projects, thereby preventing unnecessary and costly delays once construction has begun.

We’re proud of the progress made in this area over the last eight years. The policy changes we’ve implemented have and will continue to have a positive impact on our transportation system and the quality of life of all Tennesseans.

Gerald Nicely is the Commissioner of Transportation for the State of Tennessee. He serves on the Board the American Association of State Highway and Transportation Officials. He was a Founding Board member of the Frist Center for the Visual Arts and a Charter Board member of the Nashville Housing Fund. He is an alumnus of Leadership Nashville. Nicely has received numerous awards for public service including: Tennessee Association of Public Administration’s Public Administrator of the Year in 2006, the Nashville Kiwanis Club’s co-Nashvillian of the year in 2001 (his wife Donna was the co-recipient), the Nashville Chapter of the American Public Relations Society’s Apollo award in 2006 and the Nashville Engineering Center’s Distinguished Builder Award.