Going into the meet, the Lady Govs knew they would be without a large portion of their distance runners as well as jumper Cenitra Hudson. That didn’t stop them from posting a number of personal bests on the track in the distance events, relays and sprints.

“With all the season bests we had today,” head coach Doug Molnar said. “I still think we need to come out with a little more intensity. Even with everything that happened today, I didn’t see a real sense of urgency. I think this team has a lot more to give.”

Perhaps the biggest story was freshman Xiamer Richards coming in as runner-up in the 5000-meter run (18:50). Not only was it Richards’ first time in the event, she ran despite being in a car accident Friday night.

Leigha Tolliver had two solid runs in the 55-meter hurdles. In fact, she posted a pair of season-best times, improving from the preliminary to the finals. She ended with a third-place finish. Chiamaka Obi finished fifth in the 200-meter dash and was one of three Lady Govs runners to post season-best times. 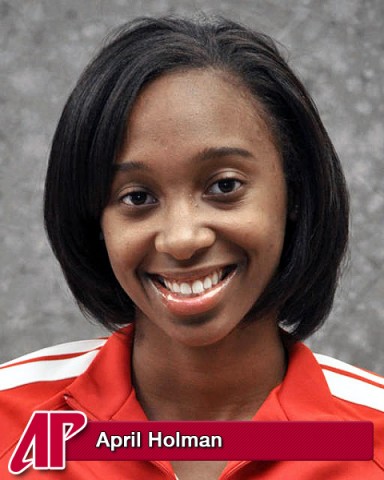 April Holman highlighted the Lady Govs efforts in the field events, tying her season-best in the high jump.

“April’s getting more consistent and little better each week,” Molnar said. “Leigha’s getting closer to where she needs to be as well and Obi ran a really good race. I can’t say enough about Richards and the effort she put up today. With everything that went on, she came in healthy and got it done. Janelle Avery was sick and posted a great mile time in the distance medley; she finished that race well.”

Richards also led off the distance medley relay, followed by Taelor Slaughter, Shannon Christian and anchored by Janelle Avery, for a season-best time. The Lady Govs broke the four-minute mark for the first time this season in the 4×400 relay. Slaughter led off that race, followed by Obi, Ashley Carson and Jasmine Scott.