“We went to the village to have a shura with the elders, so we could sit down and hear their concerns,” said U.S. Army Staff Sgt. David Jansky, 3rd Squad, 3rd Platoon counter insurgency team noncommissioned officer in charge with Company C, 1st Bn., 506th Inf. Reg., 4th BCT, 101st Airborne Div., and native of Towner, ND. “We then took the opportunity to enhance our biometric database by using the (hand-held interagency identity detection equipment) system to scan some of the males in the village.”

The HIIDE system creates a database of a person’s biographic information. The system allows Soldiers in the field to quickly identify whether a person of interest is on a watch list and creates reports to support further intelligence analysis.

“Biometrics is starting to play a unique role in the capturing of enemy personnel,” said Jansky. “If we have a set of prints from (a crime scene) and the prints are from a person who has been put into the system then we can identify who they are, where they are located, and we have two solid pieces of evidence to pursue prosecution.”

The Currahees understand the value of this data and have increased their effort to enroll the Afghan people into the system.

“If we are to stay a step ahead of the enemy, we must use every tool at our disposal,” said Jansky. “This helps us minimize the smaller groups of insurgents in our (area of operations), thus getting us one step closer to the larger cells working in Paktika and throughout Afghanistan.” 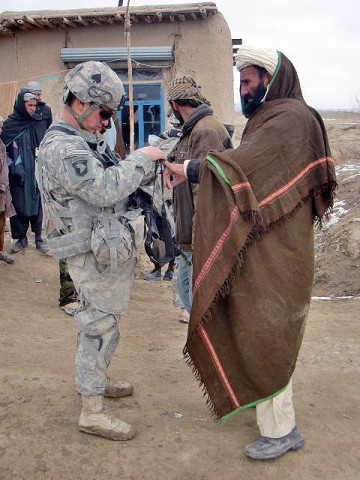 Each member of 3rd Plt. has been trained and is proficient on the HIIDE system. The platoon has entered more than 400 people with a goal to enter as many people as possible within Paktika Province, said Janksy.

While visiting the village of Jani Khel, the members of 3rd Plt. share information about the Afghan Guardians of Peace program.

GOP is a Government of the Islamic Republic of Afghanistan endorsed program that offers rewards to villagers who report insurgent presence weapons and improvised explosive devices in their village. It is a program developed to allow the reporting individual to remain anonymous for their protection.

“This program rewards people who give information that leads to the capture of Taliban or enemy forces,” said U.S. Army Spc. Andrew Stankiewicz an infantryman with 1st Squad, 3rd Plt., 1st Bn., 506th Inf. Reg., 4th BCT, 101st Airborne Div., and native of Kenosha, WI. “This program allows the people in the towns and villages to … turn in members of the Taliban who are possibly harassing them.

“Guardians of Peace is important because it gives back to the people who help us make their villages more secure,” said Stankiewicz. “It gives the people a bigger reason to help us out, and they can do it in secret without fear of reprisal.”