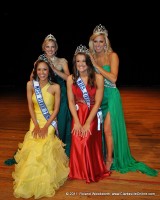 Clarksville, TN – On Saturday night the 2011 Miss River Queen and Miss River Teen were crowned at the Clement Auditorium at Austin Peay State University.  The event was hosted by Clarksville’s own Art Conn and Catherine Werne Nail, who was crowned Miss River Queen in 2008 and placed 2nd Runner up at the Miss Tennessee USA

Giselle Fontenot was crowned Miss River Queen. The first runner up is Lesleigh Stanfill and Second runner up is  Lauren Tanner.

Sarah Gross was crowned as Miss River Teen while Amy Taylor was the first runner up and Channing Simmons was the second runner-up.  The padgent is part of the Rivers & Spires Festival which is set to kick off on April 14th in Downtown Clarksville.