Nashville, TN – Mat Gamel went 3-for-5 with a pair of home runs to power the Nashville Sounds to a 7-6 victory over the Round Rock Express on Monday evening at Greer Stadium in the opener of a four-game series.

With the win, Nashville (28-35) snapped a three-game losing streak and notched its 11th victory in the last 16 games played at home in Music City.

Gamel’s two-homer night continued the infielder’s red-hot week at the dish. In his last five games, he is hitting .385 (10-for-26) with four home runs and 11 RBIs. It was Gamel’s third two-home game this season and the Sounds’ eighth overall. He now leads the club with 13 roundtrippers. 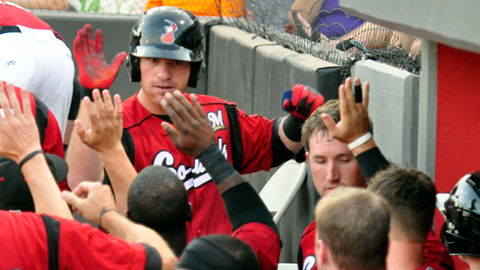 Round Rock took an early lead against Sounds starter Josh Butler, belting a pair of first-inning longballs to jump ahead 2-0.

With one out, shortstop Omar Quintanilla turned the right-hander’s 1-0 offering into his third home run of the season, a solo shot off the clubhouse building in right-center. Two batters later, Express first baseman Chad Tracy hammered a solo homer deep to left to double the visitors’ advantage.

Sounds leadoff man Brandon Boggs halved the Express lead when he opened the Nashville first with his third roundtripper of the year, a solo blast to right-center off Round Rock starter Brett Tomko. It was Nashville’s first game-opening home run since Adam Stern accomplished the feat on August 30, 2010.

Gamel evened the contest at 2-2 when he led off the Sounds’ second with his team-leading 12th home run of the season, a massive solo blast to right-center that bounded onto Chestnut Street.

Nashville broke the game open with a five-run outburst in the third against Tomko.

Eric Farris started things off with a leadoff double before scoring on Gamel’s second homer of the night, a one-out, two-run shot to right that put Nashville on top, 4-2. The rally continued as the next three Sounds reached to load the bases: Mike Rivera doubled, Caleb Gindl singled to extend Nashville’s longest hit streak of the year to 13 games, and Edwin Maysonet was hit by a pitch.

Red-hot Taylor Green (2-for-3) unloaded the bags with one swing of the bat when he laced a three-run double to right-center that one-hopped the wall to make it a 7-2 contest. With the two-bagger, Green has now recorded an extra-base hit in eight consecutive games and extended his season-best hitting streak to 11 games.

Tomko (1-3) took the loss for Round Rock after giving up seven runs on nine hits, including three homers, in his three innings of work.

Round Rock got three runs back in the fifth against Josh Butler, pulling within 7-5. Joey Butler drew an inning-opening walk then scored when Doug Deeds followed with an RBI double to right. After a Kevin Cash groundout, Julio Borbon drove in Deeds with a single to left. Later in the frame, former Sound Brad Nelson drew a two-out, bases-loaded walk from Butler to force home Borbon with the inning’s third run.

Josh Butler (4-4) earned the win for Nashville after working five innings and allowing five runs on seven hits while walking four batters and striking out one.

Left-hander Daniel Meadows made his career Triple-A debut for Nashville and saw his first pitch as a Sound belted over the right field wall as Joey Butler led off the Round Rock sixth inning with a solo homer. The blast, the outfielder’s third of the year, made it a one-run contest at 7-6 and extended Joey Butler’s hitting streak to 14 games, the longest by an Express player all season.

Right-hander Sean Green worked the final two frames in hitless fashion for the Sounds, striking out four of his six batters faced, to earn his third save of the year.

The teams continue the series with another 7:05pm contest on Tuesday night. Right-hander Mark DiFelice (2-1, 1.82) will toe the rubber for the Sounds to face right-hander Tommy Hunter (1-1, 3.38), who is with the Express on a rehabilitation assignment.