HomeCommentaryGroundhog: the next surge of infiltrators
Commentary

Groundhog: the next surge of infiltrators 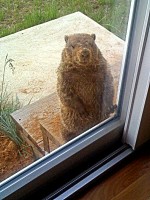 Moving into the woods creates a different perspective on dealing with animals. We are now on their turf. We are the intruders.

My battle with the squirrels has been well documented. Currently, I have held the sunflower seed bandits at bay with metal cable instead of 550 cord to hoist the bird feeders. Who knows how long that will keep them bewildered. I am certain I have only bought time with that one, not won the war.

Now, it is the cute little ground hog that has become a militant. The little guy harmlessly enjoyed our clover for several weeks. He would work his way through the yard enjoying a mouthful of clover every few steps along the way.

Apparently, while I was out of the country, he surmised that moving in would be significantly more convenient.

I first noticed him eating clover at the corner of the house around the garden hose reel. Then, he seemingly disappeared behind the air conditioner. That seemed odd.

Upon closer inspection, I discovered a huge pile of dirt behind the air conditioner unit. Under the unit, between the pad and the house foundation was a hole that appeared to open into a massive cavern beneath the unit.

Using the garden hose to flood the hole with water flushed the little guy out of the hole. But, I’m certain that is only temporary.

Knowing that the cavern is in the same area as the underground electrical, fiber optics data and natural gas lines causes me significant concern. It is not a good place for the furry guy to build his winter home.

Now, I am planning strategy for a new battle with one of the little guys I used to like. I could just put the dirt back in his hole. He’d dig it out again. I’m considering dumping concrete in his hole. He’ll probably just relocate around it.

I don’t want to harm these forest critters. But, they are getting annoying.