The Lady Govs finished third (83 points) in a meet dominated by regionally-ranked teams from the Division II level. They finished behind West Florida (43 points) and Delta State (60), which were ranked eighth and fourth, respectively, in the Division II South Region preseason poll. 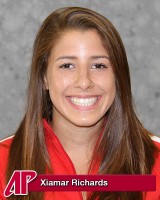 “We ran better today,” said Molnar. “We still have to get more miles in during the week. We were winning this meet at the mile and a half mark and faded in the last mile. Overall it was a very good effort and we realize now what we have to do to get better.”

Austin Peay will have one week to prepare for the Georgia State Invitational, next Saturday.