Yator led the Govs, finishing the eight-kilometer course in 27:09, just 1:27 behind the winning pace set by UAH’s Blaise Binns.  Junior Geofrey Kosgei finished 13th with a time of 27:31 as they ran into trouble in the race’s second half.

“Boniface and Geofrey both had top five finishes about halfway through the race,” said head coach Doug Molnar. “But they faded in the final miles. It’s tough to say we need to work on our conditioning at this point in the season, but we have to get more miles in.”

The Govs finished third (102 points) behind host Alabama-Huntsville (20) and West Florida (49), which were ranked second and sixth, respectively, in the Division II South Region preseason poll. 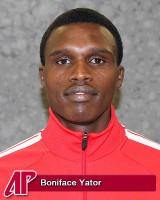 “We didn’t run too badly today, Boniface and Geofrey got out front quickly,” Molnar said. “Our next three were bunched together which is what we want but I would’ve like to have seen them further up in the pack.”

Austin Peay has a quick turnaround with the Georgia State Invitational, next Saturday.