Clarksville, TN – A man is in custody and charged with Criminal Homicide in conjunction with the death of Daniel Dion Bridges, 39, of Clarksville.

The investigation by Detective Tim Anderson, uncovered that on October 17th, 2011 a verbal argument took place between the suspect,  Francisco Aguilar-Valencia, and the victim, Daniel Bridges, at 736 Martin Street; the reason for the argument has not been disclosed to Police. 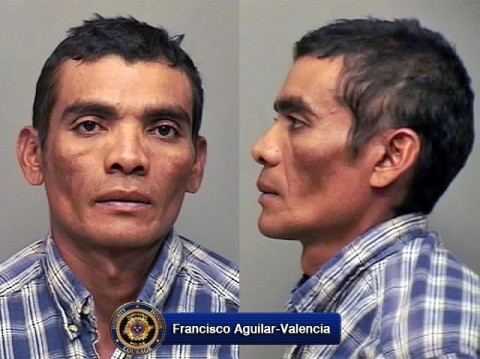 911 received a call when the body was found in the street by a man heading to work.  When Police arrived they found Bridges who appeared to have sustained several stab wounds to the chest area (M.E results have not been received for confirmation) and was deceased.

Francisco Aguilar-Valencia was developed as a suspect as the investigation progressed and was located and apprehended at a Martha Lane residence in the early morning hours of October 18th.

During Detective Anderson’s interview, Aguilar-Valencia admitted to having a knife and being the only person fighting with Bridges.  The evidence at the crime scene was consistent with the fight described by the witness and Aguilar-Valencia.