October through December are peak periods for deer and vehicle accidents.

According to State Farm Insurance, November is the heart of the deer migration and mating season, and is the month during which deer-vehicle encounters are most likely. More than 18 percent of all such mishaps take place during the 30 days of November.

Deer-vehicle collisions are three times more likely to occur on a day in November than they are on any day between February 1st and August 31st. October is the second most likely month for a crash involving a deer and a vehicle. December is third.

The average property damage cost of these incidents during the final half of 2010 and the first half of 2011 was $3,171, up 2.2 percent from the year before. 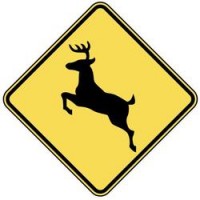 The Clarksville Police Department offers the following hints to avoid collisions with deer:

Motorcyclists need to be especially vigilant for deer and should reduce speed to allow for more reaction time.  Wear protective gear.  If riding in a group spread out so if one rider hits a deer, they will reduce the chances of taking out other riders.