Fort Campbell, KY – Bob Dylan sang, “The times are a changing” and so is the Army’s Physical Fitness Test. It’s assured the singer/songwriter was not talking about push-ups, sit-ups and a two-mile run, but the time is near where the Army will test its Soldiers in a more combat focused fashion. The 2nd Brigade Combat Team, 101st Airborne Division (Air Assault), will be ready for that change.

“The APFT provides a baseline measure of general physical fitness, but it does not sufficiently evaluate all of the physical aptitudes required to perform duties in combat,” said Col. Dan Walrath, Strike commander. “So we developed the Iron Strike Combat Physical Fitness Test to provide an additional metric for leaders to use to assess Soldier strength, endurance and anaerobic fitness under combat conditions. The test requires Soldiers to wear combat gear and conduct physically demanding yet functional tasks that more closely replicate physical activities in combat.” 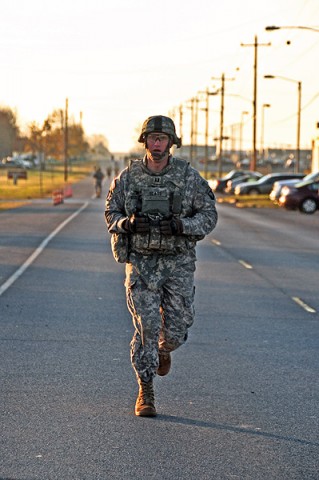 For the past month, Strike has been pulling its leaders during the early physical training hours, better known as morning PT, and has been conducting the trials for its ISCPFT. Company commanders, brigade staffers and leaders put on their heavy gear and perform the exercises that better prepare for a combat environment. Running for a total of one mile and a half, dragging weighted medical liters, carrying full water jugs for a total of 300-meters, sprinting in a zig-zag pattern, climbing up an air assault rope and jumping a 6-foot wall, are the events completed by the test takers on ISCPFT-November 10th.

“It definitely pushed me and I had to dig deep,” said Capt. Michael Gold, commander of Strike Cav’s infantry company, Company C, 1st Squadron, 75th Cavalry Regiment. “This is going to give us something to focus on for our own company combat PT and the company can do well when it is time to test. We got to be prepared,” said Gold, still breathing hard after completing his test. Gold finished under the 30-minute time marker.

The ISCPFT is in it’s beginning stages and a finalized version is soon to be implemented throughout the brigade and the medical side of Strike welcomes the change. 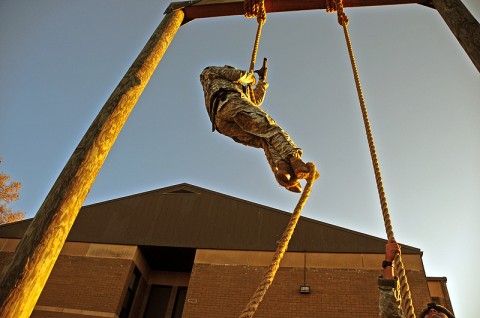 “The Army is changing their focus on physical training all together, more focused on injury prevention and combat,” said Capt. Patrick Glass, commander of Strike’s medical company, Company C, 526th Brigade Support Battalion and an ISCPFT taker on November 10th. “Changing the focus of today’s PT with the combination of events like this new Strike PT definitely helps prevent injuries as we get ready for our deployment.”

Strike’s time of deployment back to Afghanistan is on the table and the brigade plans to be physically ready both at the Army’s standard and at the Strike standard.