Fort Campbell, KY – A year ago during the holidays, the Soldiers of Company B, 1st Battalion, 502nd Infantry Regiment, 2nd Brigade Combat Team, 101st Airborne Division (Air Assault), were 7,440 miles away from Fort Campbell and partnered with the Afghan National Army, climbing six-foot grape walls made of mud and patrolling the villages of Kandahar. This year, they are partnered with their families and enjoying a rare holiday season at home.

Company B, known as the Bulldogs, know the importance of spending time with their families and made this year memorable. The Soldiers, the Bulldog Family Readiness Group and the Occupational Therapy Group from Milligan College partnered in created a Christmas Giving Tree for the children of the unit and handed out an array of presents at Strike Academy December 15th.

“Milligan College wanted to do us a service and give out Christmas gifts to our little Bulldogs,” said Capt. James Small, the commander of Company B. “A lot of people say they support the troops and are pro-American, but not many do anything to this extent to help us and our families, so for these ladies to come here and drive four-hours to do this for us is amazing. They started Christmas.”

The presents wrapped and displayed were handed out accordingly to age and gender. The Milligan College campus and its surrounding communities in eastern Tennessee provided the gifts for the little Bulldogs. 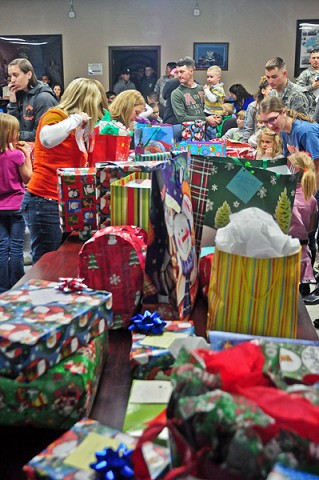 “Our biggest mission is the community outreach and we really wanted to get involved in particularly with the Bulldog Company,” said Morgan Melzer, the leader of the Occupational Therapy Group while speaking to the Soldiers and families. “We are so grateful and thankful for all that you do and with the help of our classmates, friends and family we have sponsored all 89 kids.”

As the presents were opened, smiles and laughs filled the large conference room usually held for mission briefs.

“The turnout was amongst the best a Bulldog FRG meeting has ever seen,” said 1st Lt. Jonathan Rezendes, the company’s executive officer. “The Strike Academy was busting at the seams with Soldiers and family members. Their responses were overwhelmingly positive and they were extremely grateful for the gifts and the work done by the citizens supporting their troops.”

The unforeseen connection between Bulldog and Melzer began years ago as 1st Lt. Anthony Kramer, a platoon leader in the company, attended high school and undergraduate college with the Milligan student. Recently Melzer approached Kramer inquiring how she could help the unit during the holiday season. The families enjoyed the Milligan College contributions.

“Everyone is smiling and this is really bringing the holiday spirit to the Bulldog family,” said Hope Main, wife of Staff Sgt. Isom Main, a supply sergeant for the company. “The stuffed animal, a tiger, is really nice and this was really great.” 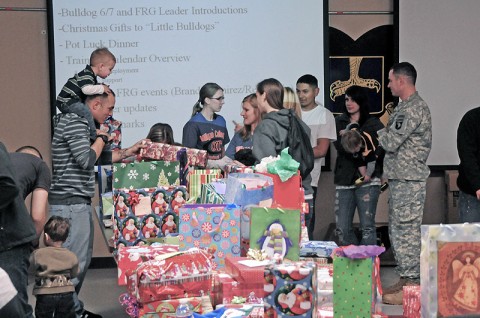 The holiday mission was a success with Milligan College, the Soldiers of Bulldog Company, their family members and the Bulldog FRG coming together making the night memorable for the First Strike youth.

“There was a lot of hard work put in and they were afraid they weren’t going to get all the gifts done, but they did and it was a big success,” said Brandi Ramirez, Bulldog FRG co-leader and wife of the company’s Staff Sgt. Jose Ramirez. “It means so much to know that people care about the little bulldogs and luckily we have everybody home for Christmas, because a lot of years, we don’t, so we are thankful for it all.”