Austin Peay (8-11, 2-2 OVC West) never held a lead in the match and only forced eight ties in the three sets. Doyle was the lone Lady Govs player to reach double-digit kill territory and posted a .229 attack percentage. Sophomore Liz Landon was the only other APSU hitter to show any offensive consistency, recording five kills on 10 attacks. 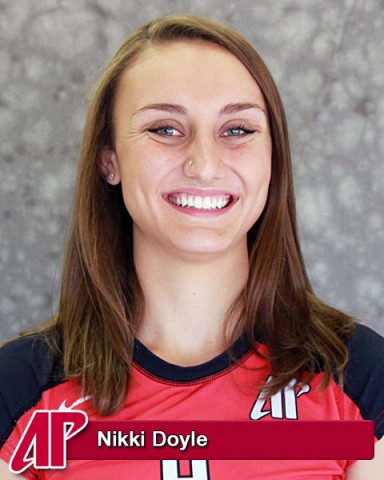 “We were not mentally prepared to play today,” said Lady Govs head coach Taylor Mott. “We did not execute and made so many errors we never really gave ourselves a chance to win. We are entering a critical three weekends in conference play and need to be ready to play if we are going to keep pace in the race.”

Austin Peay returns to action when it travels to OVC West-leading Southeast Missouri for a 6:30 p.m., Friday contest at Houck Fieldhouse.

Copies in a Flash Player of the Game was Nikki Doyle.