Clarksville, TN – Anthony Bradley, who finished tied for first at the Bearcat Invitational this week, has been named Ohio Valley Conference adidas® Male co-Golfer of the Week. 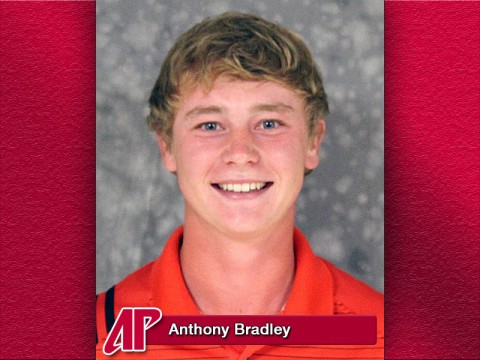 It was the second time this an Austin Peay golfer has been earned such honors. Dustin Korte was the co-golfer of the week for his performance at the Cardinal Intercollegiate. Bradley shared his award with UT Martin’s Tyler Shellnut.

Bradley, the defending OVC Medalist, finished tied for first at the Bearcat Invitational held at the Traditions Golf Club in Hebron, KY. The junior from Ivybridge, Devon (England) carded rounds of 70-71-72 to finish at 213 (-3) and tied with Northern Kentucky’s Corey Richmond, who won medalist honors in a one hole playoff.

The score was a stroke ahead of three other golfers in a field that included four OVC teams (and 22 total OVC golfers). Bradley’s play helped Austin Peay to its second-straight team championship at the event, as the Govs rallied from four shots down entering the final round to top OVC rival Belmont by six strokes.

The Governors will face off against Belmont and four other OVC foes (Jacksonville State, Eastern Kentucky, Morehead State, Tennessee Tech) this weekend at the WKU Kenny Perry Invitational at The Club of in Bowling Green, KY.