“If it’s caused by a virus, then theoretically it could be cured,” he said. “So what’s your legal obligation to zombies? Are they humans, monsters, animals?”

His wife, APSU associate professor of biology Dr. Amy Thompson, was more concerned with how the undead came to take over the world. 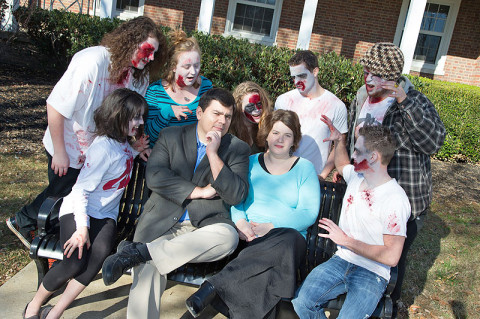 “What caused the zombie apocalypse?” she said. “We often look to the Centers for Disease Control and the World Health Organization for answers, but finding these answers isn’t always easy.”

The professors were both lucid and in good health. A terrible flu virus recently swept through Clarksville, and a long semester at APSU had just ended, but the two faculty members didn’t show signs of delirium. They were simply talking about the new academic book they are developing – “The Real World Implications of a Zombie Apocalypse.” The book, scheduled for release in the fall of 2013, is under contract by the major academic publishing house McFarland Press.

“It’s not a fiction book,” Antonio said, unbuttoning his sport’s coat. “Zombies are just a vehicle to push us forward. We’re looking at real-life events and disasters that we thought could be world enders, or at least devastating, such as Hurricane Katrina or the 1918 flu epidemic.”

“It can be academic but still be fun and fresh and current,” Amy said. “One of the big things you have to do as a college professor is reach your audience, reach your students, and do things that they like in order to engage them in learning. Things like this are certainly engaging.”

The book will consist of 20 chapters that examine the zombie apocalypse from historical, political, military, neurological and biological perspectives. It will also examine the legal and financial implications of such a disaster. The Thompsons solicited top scholars across the country, including Harvard University assistant professor of psychiatry Dr. Steven Scholzman, to contribute essays for this work. They also invited two of their colleagues, APSU biology professor Dr. James Thompson and APSU sociology chair Dr. David Steele, to write chapters for the book.

“We have contacted the people that we think will best fit with the essays,” Amy said. “The end product will be something that is very academic and could be used as a tool for planning for real-life catastrophes.”

“Pop culture is a rising academic field,” Antonio said. “It allows you to see history and other trends in a new perspective. And it also gives professors an immediate way to relate to students.”

The development of this new book actually started at one of the largest pop culture events in this country – San Diego’s annual Comic-Con convention. Dr. Antonio Thompson was at the event to present an academic paper he wrote on Captain America at the convention’s Cultural Arts Conference. Cambridge Press will soon publish that paper in a new scholarly book.

“I talked about how Captain America the comic book and the comic book character represent American nationalism and U.S. foreign policy,” Thompson said.

After the panel ended, the Thompsons walked through the Comic-Con convention among fans dressed as Star Wars and comic book characters. That’s where they happened upon a booth manned by editors from McFarland Press. For years, the couple had discussed developing a serious, academic work on zombies, so they pitched the idea. McFarland loved the concept and issued a contract for the book.

“Zombies really are a metaphor for so much more,” Amy said. “Students want to read about zombies, but what they get out of it is actually the application of the material. Some people will say, ‘How could that be academic?’ I think if you look at the finished product, the melding of academia and popular culture will be clear.”

That finished product will hopefully be out by next Halloween. Until then, the Thompsons are busying themselves with research, watching the AMC series “The Walking Dead,” reading books such as “The Complete Zombie Survival Guide” and examining “The Night of the Living Dead” and other classics of the genre by film director George Romero.

“The zombie books and movies, they really capture what we’re frightened of right now,” Antonio said. “In the 1960s and 1970s, they really addressed what was going on then.”