Austin Peay (4-1) got on the board in the first inning when second baseman Jordan Hankins pounded his season’s first home run – a two-run shot – over the right center field wall. One inning later, catcher P.J. Torres added a solo home run to left center field, putting the Govs up 3-0. 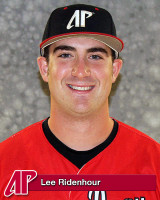 That was enough run support for Austin Peay starting pitcher Lee Ridenhour (2-0) who allowed one run over 6.1 innings and struck out six for his second straight win. He retired the first five batters he faced before running into trouble in the second, surrendering a walk and back-to-back singles – the latter by second baseman Marshall Vallandingham scoring the Redbirds’ first run. Ridenhour would settle back in and would not allow another run the rest of his outing.

Illinois State (2-2) would scratch out some runs against the Govs bullpen, right fielder Eric Aguilera hit a three-run home run to right center for the game’s final runs.

Hankins finished the evening 3-for-5 at the plate, following his home run with a single and a double. Shortstop Reed Harper went 3-for-4 for his first multi-hit outing this season. In addition, Gautier was 2-for-4 with two RBI and Riner was 2-for-4 with a RBI. Austin Peay posted season highs for runs scored and hits (14) in the contest.

Illinois State’s Brad Sorkin (2-2) suffered the loss after allowing five runs on six hits over four innings. Aguilera’s home run was part of a 2-for-4, three RBI outing. The Redbirds offense was held to four runs on six hits.