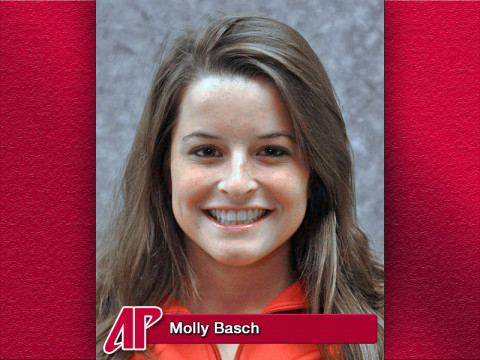 Basch carries a 4.0 grade-point average into her senior year at Austin Peay. A psychology major, Basch was the winner of the Govs Club Academic Achievement Award at the spring awards banquet, which is awarded to the rising senior female student-athlete with the highest GPA, department-wide.

During the season, Basch placed eighth at the Ohio Valley Conference Indoor Track and Field Championships with a 3.10m pole vault mark.

Basch is the first Lady Gov track athlete honored by CoSIDA since Carrie Burggraf, another Austin Peay pole vaulter, and Shamai Larsen were named Academic All-American in 2010; Burggraf was a first-team and Larsen was a second-team honoree.

Basch’s name now will move to the national ballot to be considered for Academic All-America. CoSIDA began the Academic All-America program in the 1950s and has honored thousands of deserving student-athletes from numerous sports across the country in all divisions. Capital One became official sponsor of the program in January 2011.