Bloomington, IN – If Austin Peay State University’s baseball team is to advance to its first NCAA Super Regional it will have to do it out of the loser’s bracket, as the Govs pitchers had no answers to Indiana University’s hitters in a 15-6 loss Saturday in Bloomington.

The Govs (46-14) will now have to win three games to advance out of the Bloomington, IN Regional tournament, beginning with a June 2nd, noon CT, contest versus Valparaiso University (32-27) – who beat the University of Florida June 1st, 5-4, to stay alive in the tournament.

If Austin Peay wins against Valparaiso, they will have to play a second game on June 2nd versus Indiana, at 6:00pm, in hopes to force a second championship game on June 3rd. 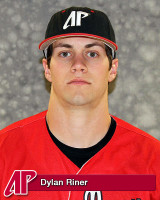 Early on it looked like it might be Austin Peay’s day, as they jumped on the Hoosiers (45-14) by scoring three runs on four hits in the bottom of the first inning.

The Hoosiers would get the first out of the inning at third base, forcing Riner, on a sacrifice bunt attempt by Craig Massoni.

That brought up Reed Harper, the Governors all-time hits leader, who blasted a 1-1 pitch over the left field fence for a three-run homer.

It was Harper’s seventh round tripper of the season.

Indiana would respond in a big way the top of the second inning, scoring five runs, to take its first lead 5-3.

Dustin DeMuth started the inning with a double off Govs starter Casey Delgado and moved to third on a fly out by Casey Smith.

Delgado would then walk Chad Clark, with Clark advancing to second base and DeMuth coming in to score the first Hoosiers run on a passed ball by Govs catcher P.J. Torres.

Delgado would then walk Justin Cureton, with him and Clark both moving up a base on a fly out by Will Nolden.

Indiana catcher Kyle Schwarber would follow with a single to center field to drive in Cureton and Clark to tie the game, 3-3.

The very next pitch, Sam Travis would give Indiana the lead on a two-run home run to center field to give the Hoosiers a two-run advantage.

Austin Peay would cut the deficit in half in the bottom of the inning, scoring a two-out unearned run.

After DeNato struck out the first two Govs hitters to start the inning, Riner kept the inning going with a single, while advancing to second base on a passed ball by Schwarber.

Hankins would make the Hoosiers pay for the miscue, as he followed with a double down the right field line scoring Riner to make the score 5-4.

Riner and Hankins led the Govs with three hits each.

Indiana would add to its lead in the top of the fourth inning, scoring twice, to get out to its largest lead of the day, 7-4.

Nolden reached on a bunt single to start the inning and advanced on a muffed throw by Massoni at first base on a failed pick-off attempt.

He would then advance to third on a fly out by Schwarber, followed by Austin Peay relief pitcher Kevin Corey walking Travis and Scott Donley to load the bases – with no outs recorded.

Michael Basil would follow by hitting the first pitch he saw through the left side of the Govs infield for a two-run single to give the Hoosiers a three-run lead.

The Hoosiers would blow the game open in the top of the fifth inning, scoring four more times, to go up seven runs.

Cureton reached on a one-out double, followed by a single by Nolden.

Schwarber then drove in Cureton with the inning’s first run with a single, followed by a walk to Travis to load the bases.

Donley then got the big hit of the inning, as he cleared the bases with a three-run double to right center to make it 11-4.

Indiana would continue its scoring flurry in the sixth inning, scoring four more runs — on only two hits – as the Govs gave up two runs on bases-loaded walks and two more on a single by Basil.

Austin Peay would score its first runs since the second inning, scoring twice in the bottom of the seventh.

Riner, Hankins and Massoni opened the inning with three straight singles, but Harper followed by hitting into a double play — with Riner scoring the first run of the inning.

Cody Hudson would then single in Hankins, with the second run of the inning, to make it 15-6.

Delgado (9-3) took the loss, which also ended a 16-game win streak for the Governors.