Brentwood, TN – In her first two matches with Austin Peay State University women’s soccer team, Shelby Olszewski has made quite an impression.

The junior defender from Pickerington, Ohio, earned Ohio Valley Conference Defensive Player of the Week honors after scoring a goal and assisting on another during last weekend’s season-opening road trip. 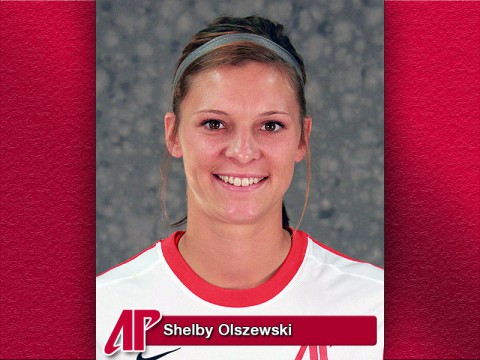 In her first collegiate match – she spent two seasons as a member of the Lady Govs basketball team – Olszewski logged 71 minutes against Chattanooga. She assisted on senior Tatiana Ariza’s 77th minute goal, and embarked on a winding drive just over a minute later to score her first career collegiate goal.

“Shelby had a great performance against Chattanooga,” said head coach Kelley Guth. “A defender scoring and getting an assist in the same game is tremendous, and I’m happy she was recognized this week.”

Olszewski’s honor is the first weekly OVC award for an Austin Peay defender since Samantha Northrup won for the week of October 26th, 2010.

It’s the third time in the last four seasons an Austin Peay player has earned a weekly award based on the opening weekend of play; Ariza won for the first week of 2011 – scoring a hat trick against Alabama A&M and two goals against Chattanooga – and senior Emily Kink was honored in the first week of 2010 for scoring two goals, including the game-winner, against VMI.