Tennessee Tech (3-9-0, 1-2-0 OVC) struggled to get much offense going across the board, with 2012 OVC second-team selection Ellie Iaciofano being held to just two second-half shots.

“I was very proud of the team today,” said head coach Kelley Guth. “I thought we executed our game plan really well. We were frustrated with our execution in the final third after last weekend and I think we did a really good job with that.”

Austin Peay wasted no time getting on the board, scoring a sixth-minute tally from senior Tatiana Ariza. She and junior Frankie Carbajal played a little give-and-go inside the box, with Ariza slotting the shot into the lower left corner.

Ten minutes later, Ariza found the nylon again. A clear attempt by Tennessee Tech was corralled by Ariza, who maneuvered her way into the middle of the box and fired a left-footed shot into the lower right corner for a 2-0 advantage. 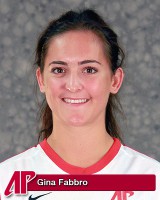 Ariza would not score the Lady Govs third goal but she would set it in motion. Her cross into the box found the foot of freshman Megan Sanchez, who uncorked a shot that deflected to freshman Gina Fabbro all alone in front of the net. Fabbro’s sixth goal was Austin Peay’s final tally before halftime, and Austin Peay entered the break with a 3-0 lead.

The Lady Govs picked up where they left off to start the second half, scoring another goal off the foot of senior Andy Quiceno with less than a minute gone in the half. The goal was Quiceno’s second in 2013. Fabbro picked up the assist, her first as a Lady Gov, to make it 4-0.

Ariza finally got that hat trick in the 60th minute, putting two shots on net that Tennessee Tech’s Jordan Brown saved but could not maintain before wheeling into the middle of the box for a clearer shot. It was her third career hat trick and 12th career multi-goal effort.

“It definitely gives me a lot of confidence,” Ariza said. “We have to have really good possession every game and we did that today.” 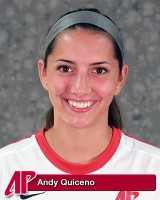 For Ariza, the hat trick gives her 50 career goals, putting her 12 behind Eastern Illinois’ Beth Liesen (2000-03) for most in OVC history. She led all players with seven shots, putting five on net.

The Lady Govs return to action with a 2:00pm, Sunday, tilt at E.S. Rose Park against Belmont.