Clarksville, TN – This November, the Roxy Regional Theatre brings the Great American Novel from the page to the stage with the regional premiere of F. Scott Fitzgerald’s “The Great Gatsby”.

The production, adapted by Simon Levy, is the only stage version authorized by the Fitzgerald estate since 1926. A finalist for the PEN Literary Award in Drama, its world premiere at Minneapolis’ Guthrie Theater commemorated the opening of the Guthrie’s new three-stage center in July 2006.

In this opulent, carefree lifestyle of the Jazz Age, there lurks a materialistic center, making The Great Gatsby’s cautionary meditation on the ever-elusive nature of the American Dream resonate anew for each generation. 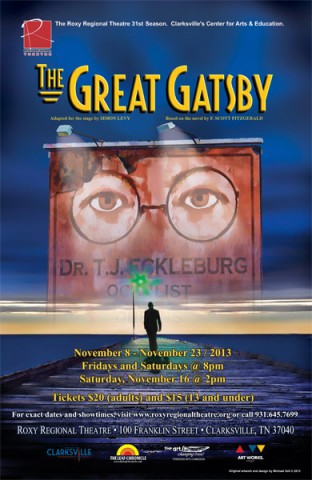 “The Great Gatsby” runs November 8th through November 23rd, playing Fridays and Saturdays at 8:00pm, with a 2:00pm matinee on Saturday, November 16th.

Friday, November 8th, is the Roxy’s traditional pay-what-you-can preview of “The Great Gatsby”. All tickets not pre-sold at the regular ticket price will go on sale at 7:30pm that evening for whatever amount patrons are able to pay.