A large number of families, friends and fellow soldiers turned out to greet the 122 returning troops during a welcome home ceremony at Hangar 3 on Campbell Army Airfield. 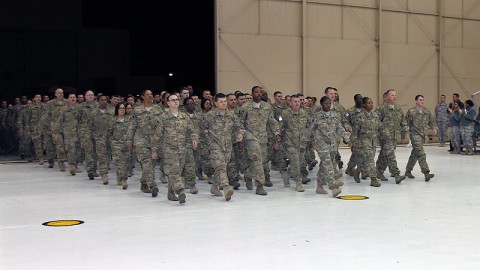 Soldiers from the 101st Sustainment Brigade, 101st Airborne Division (Air Assault), march into the hangar as they return from a nine-month deployment to Afghanistan Feb. 9, at Fort Campbell. During the deployment, the brigade provided sustainment operations and retrograde support to coalition forces throughout Afghanistan. (Sgt. Leejay Lockhart, 101st Sustainment Brigade Public Affairs)

This is the second group of soldiers to return from the deployment of the 101st Special Troops Battalion and the brigade headquarters.

A smaller detachment of soldiers arrived January 28th, along with soldiers from Headquarters and Headquarters Battalion, 101st Airborne Division. The rest of the deployed soldiers will return later this month.

“The majority of the battalion came back and the brigade headquarters and it’s a special event anytime that we have people come back home,” said Maj. Stephen M. Bussell, the rear detachment commander of the 101st STB. “We had a great family turnout. The new Army eArmy family messaging system that just replaced the old system in December worked very well.” 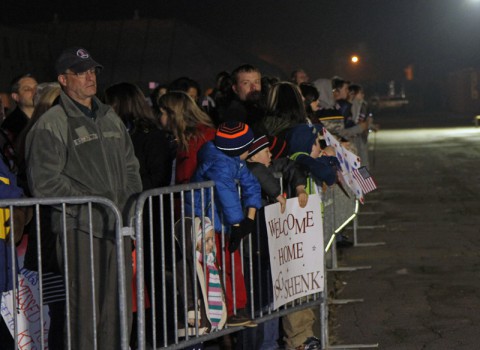 This deployment was the third for the brigade headquarters in the last five years and sixth deployment since 2001.

During their deployment, the brigade originally assumed responsibility from 1st Sustainment Brigade out of Fort Riley, KS, for sustainment operations and retrograde support for Regional Commands Capital, East and North. However, on December 4th, 2013, the brigade also assumed responsibility from the 15th Sustainment Brigade, from Fort Bliss, Texas, for RC South, Southwest and National Support Element West, making it the sole sustainment brigade in Afghanistan providing sustainment support.

The brigade headed up Task Force Lifeliner, which drove more than 70,000 miles during the deployment, while also delivering supplies by parachutes from fixed-wing aircraft and on sling loads from helicopters.

Lifeliners brought food, fuel, ammunition, equipment, mail and other vital supplies to units across Afghanistan while also taking a lead on retrograde operations, which is the process of recovering equipment used in Afghanistan. The brigade’s efforts helped close a large number of bases in Afghanistan as part of the U.S. Army’s orderly draw down of forces there.

Families rode buses to the hangar and enjoyed refreshments served by volunteers from the Association for the United States Army. Behind the scenes, soldiers on the baggage detail prepared to transport returning soldiers’ equipment from the plane and transport it from the hangar to the unit area after the ceremony. 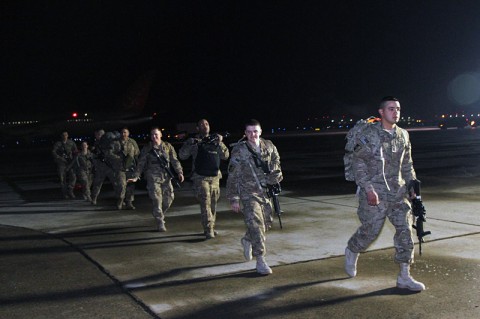 Due to a time change with the flight, the soldiers returned in the early morning hours, well before sunrise, stepping off the plane to loud cheers from a large crowd eagerly awaiting their return. The returning troops grounded the gear they brought with them from the plane, formed up and then proudly marched into the hangar. The waiting audience let out a thunderous applause for their returning heroes.

“It takes a lot of planning and effort,” said Bussell. “There are so many people who were involved starting at the lowest level up. None of that operation could have happened without the privates and junior soldiers that are out there making it happen … and it goes to show the testament of their professionalism because it was an outstanding event.” 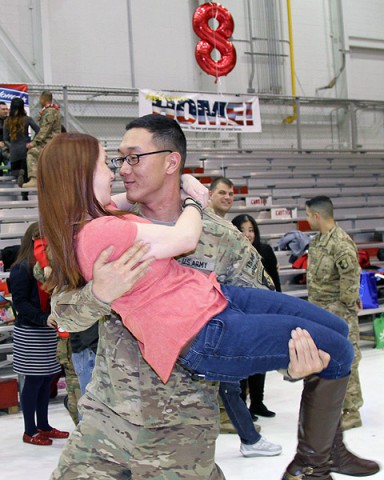 In a brief ceremony, Brig. Gen. Mark R. Stammer, senior commander, welcomed the soldiers home then released them to their eagerly waiting loved ones for 15 minutes. Soldiers and their families rushed to each other, finally reuniting after long months spent apart.

Hugs, kisses, handshakes and kind words touched every part of the crowded hangar floor. However, the 15 minutes went by quickly, and the soldiers once again fell into formation and then marched out of the hangar to begin their reintegration in earnest, having successfully completed their “Rendezvous with Destiny.”

“Every soldier deserves to have a welcome home ceremony,” said Bussell. “I mean, it’s a hero’s welcome and it shows the dignity and the respect and everything they deserve.”