Clarksville, TN – For a second consecutive week, Austin Peay’s baseball team (16-25, 8-10 OVC) will square off against a team just ahead of it in the Ohio Valley Conference regular-season race when Eastern Kentucky (20-21, 9-9 OVC) visits Raymond C. Hand Park for a three-game set.

The series will begin with a 6:00pm, Friday contest followed by a 2:00pm, Saturday affair and a 1:00pm, Sunday finale.

Austin Peay enters the weekend tied for eighth with an 8-10 OVC mark. Eastern Kentucky has a 9-9 record, one-game ahead of APSU, and is tied for fifth place in the OVC race. The Govs have six wins in 14 April contests with five of those wins coming in OVC play.

Meanwhile, Eastern Kentucky is 7-6 in April with five OVC wins.

Austin Peay has not won three consecutive games this season, posting an 0-6 mark when it has back-to-back wins in hand.

Two-way man Alex Robles (3B/P) ranks fifth among all OVC hitters and leads all freshmen with a .353 average; he has a 5-2 record and 3.50 ERA on the mound. Robles is the OVC’s reigning Pitcher of the Week after tossing a one-hit shutout at Belmont last week.

Head coach Gary McClure is one of 28 active Division I coaches with 800 wins and he is APSU and the OVC’s all-time wins leader. 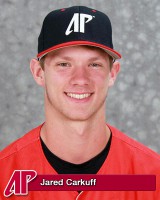 Austin Peay will field the same starting rotation for the second consecutive week. Right-hander Alex Robles has been a member of the weekend rotation each week of the campaign and is 5-2 with a 3.55 ERA in his 10 starts. He is the reigning OVC Pitcher of the Week after tossing a one-hit shutout at Belmont last Thursday, striking out a season-best nine batters. Robles is 4-1 with a 2.93 ERA in 6 OVC starts.

Right-hander Jared Carkuff is scheduled to make his third-straight OVC outing. He picked up his first OVC win at Belmont, last Friday, after allowing 1 run in 6 innings. Carkuff is 1-0 with a 4.35 ERA in his 2 starts.

Left-hander Alex Belew joined the weekend rotation at Belmont and will make his second straight start as the Govs No. 3. He tossed 4.1 scoreless innings in his first start since 2011 and his OVC debut last week, striking out 3 batters.

Starter-turned-closer-turned-starter Jared Carkuff talks about his most recent transition back to the Govs rotation and whether the Govs feel any pressure as the regular season winds down.