Clarksville, TN – A pair of midweek contests await Austin Peay State University’s baseball team as it closes the month of April. The Govs begin the week with a 6:00pm, Tuesday contest against Western Kentucky.

Austin Peay then begins a four-game road trip with a 6:00pm, Wednesday contest at Middle Tennessee.

Austin Peay (18-26) is 8-9 during the month of April with seven of those wins coming in Ohio Valley Conference play.

The Govs lone nonconference win was a Tuesday, April 9th victory against Memphis. Austin Peay started the month with a 5-2 loss at Western Kentucky, a loss they seek to avenge in Tuesday’s meeting.

Now batting .313 on the season, Smith joined fellow freshmen Alex Robles (.349 batting average) and Cayce Bredlau (.319) as the only Govs regulars batting above .300 this season, which has four weeks remaining.

On the mound the Govs will turn to freshman southpaw Levi Primasing to face Western Kentucky. It will be the Clarksville native’s first start since April 14th and seventh start this season.

A starter for Wednesday’s game at Middle Tennessee will be announced later. 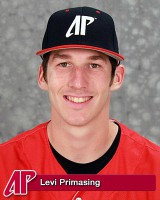 The Hilltoppers have four wins in their last seven outings. However, WKU has lost seven consecutive road contests, dating back to a March 29th win at Louisiana-Lafayette, and has a 5-13 record on the road.

Middle Tennessee (22-22) will host the Govs after a Tuesday trip to Tennessee.

The Blue Raiders enter the week winning three of their last four, beginning with a 12-6 win against APSU in Clarksville last week. A Sunday loss to Old Dominion snapped a six-game home win streak for Middle Tennessee, which has a 16-9 record at home.