Clarksville, TN – The top part of the order was held silent until the 10th inning, but provided a pair of two-out hits as Austin Peay State University’s baseball team escaped with a 6-4 victory against SIUE in Ohio Valley Conference action at the Simmons Baseball Complex.

Copeland’s first hit was a single that drove in catcher P.J. Torres, who led off the inning with a walk then neatly avoided the tag at home to put the Govs ahead. Bredlau followed with the game’s longest hit – a double over the center fielder’s head that allowed Copeland to score.

Relief pitcher Zach Walton started the bottom of the 10th and did not allow a ball out of the infield, surrendering an infield single before retiring the top of the SIUE lineup in order to end the game and pick up his first career save. 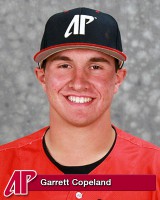 Austin Peay took its first lead of the contest with a three-run seventh inning. Left fielder Ridge Smith tied the game with a RBI double and a SIUE passed ball gave the Govs a 3-2 lead. Torres followed with a RBI single and the Govs held a 4-2 advantage.

The Cougars rallied to tie the game in the eighth as its first two batters reached base safely to start the frame. Third baseman Jacob Stewart’s RBI double was the inning’s big hit. Stewart then scored to tie the game at 4-4 on left fielder Nick Lombardo’s fly ball to right field, which was dropped by the Govs defense. 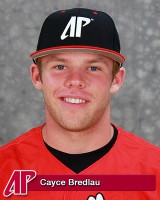 That dropped fly ball was the first of four errors Austin Peay’s defense committed in the eighth and ninth innings – including three dropped fly balls. However, SIUE could not capitalize on the miscues, leaving the game to go to extra innings.

Reliever Ryan Quick (3-6) picked up the win with 1.2 innings of scoreless relief as he struck out three of the eight batters he faced and saw three batters reach on errors. Starter Alex Robles allowed two runs on seven hits in 5.1 innings but did not factor into the decision.

Torres led the Govs with a 1-for-3, two RBI outing. He had a RBI ground out to tie the game in the second in addition to his RBI single in the seventh and a leadoff walk in the 10th. Robles and first baseman Dre Gleason each had two hits.

SIUE reliever P.J. Schuster (2-4) suffered the loss after allowing two runs in 3.2 innings, but struck out six of the 15 batters he faced. Cougars starter Jarrett Bednar allowed four runs on seven hits over the opening 6.1 innings.

Catcher Brian Sipe went 2-for-4 to pace the Cougars nine-hit attack. SIUE also received five walks and saw three batters hit by Austin Peay pitching, but left 14 men on base in the contest.