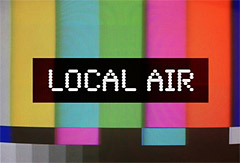 Clarksville, TN – Beginning August 4th, the Clarksville area will act as the primary home for a new comedic web series entitled “Local Air”, starring David Alford of the ABC series “Nashville”. This series was created by Josh Raby and is produced by Alex Syler, both residents of Clarksville.

“Local Air” tells the story of Gil Cotton (David Alford), a small-town television personality, whose fame becomes his biggest liability when his marriage comes to a screeching halt live on the air during the 20th anniversary broadcast of his popular morning show.

Divorce may not seem like the most fertile ground for comedy, but series creator Josh Raby disagrees: “It’s like trying to walk ten feet in the middle of a tornado. It’s just the most disorienting thing. Even the most mundane moments feel totally surprising and strange. So it’s painful for sure, and you hope it’s productive, but it’s also unexpected, and that’s what comedy’s all about.”

The series also proudly plays up its southern identity without resorting to caricature.

Says Raby: “I love the south, but a lot of folks really miss what makes it funny. Overalls aren’t funny. It’s the people, it’s the way we’re polite. The south is the kind of place where a tragedy happens and people leave casseroles on your porch but don’t bother to knock, to come inside. I was recently at a funeral and afterward went to the house of the widow. Someone had left ten rolls of toilet paper on her porch as a gift. No note. Just toilet paper. We’re just silly down here.”

The series has received broad community support in providing locations, catering for cast and crew, and even financing. There are still several ways those interested can be involved, whether it be acting as an extra, providing a hot meal, or supporting the show financially through an upcoming crowd funding campaign.

“We’ll definitely be looking for some finishing funds by reaching out to communities both online and local,” says executive producer Alex Syler. “It’s important to us we only do so once we have footage to show. We want folks to know this isn’t some dream they can help realize, it’s a great story told in their backyard, and they can help us tell it.”

“We have over 75 speaking roles in the first season, and it was always our goal to feature both professionals and local talent. Everything about this show is geared toward supporting the region and doing something Middle Tennessee can be proud of,” says Syler.

“Local Air” will be filming between August 4th and September 1st in Clarksville, TN and the surrounding area. The ten-episode first season was written by a team of writers from Los Angeles, Ohio, and Tennessee over the past year.

The full first season will be released on Vimeo Video-on-Demand in December of 2014.