Edwardsville, IL – Austin Peay State University women’s soccer team concluded a crucial weekend of Ohio Valley Conference competition with a 1-0 win against conference-leading SIU Edwardsville, Sunday, at Korte Stadium. The Lady Govs were able to leave SIUE with the victory thanks to a 58th minute goal by sophomore Gina Fabbro.

In the first half, the Cougars (7-5-1, 4-1-0 OVC) outshot the Lady Govs 9-0. Junior goalie Nikki Filippone recorded three saves in the opening stanza.

After intermission, Austin Peay (4-9-0, 3-2-0 OVC) grabbed a lead they would not relinquish in the 56th minute, when Fabbro intercepted a back pass to goalie Jennifer Pelley and fired the ball into the goal for her fifth goal of the season. 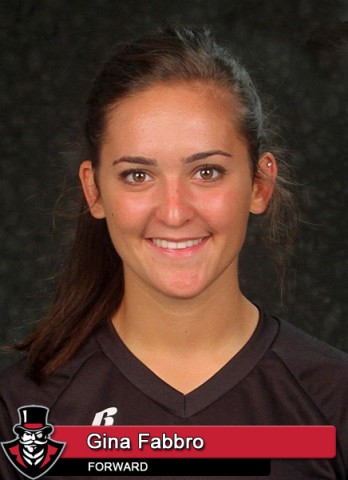 Despite being outshot by the Cougars 15-6, the Lady Govs were able to hold on to their lead. Filippone recorded six saves on the way to her second shutout of the season – and the weekend – while offensively, Fabbro led the Lady Govs with two shots in addition to her game winning goal. Seniors Claire Pultz and Shelby Olszewski also recorded shots on goal for Austin Peay.

Pelley made three saves in the loss for SIU Edwardsville. Kayla Delgado (five shots, two on goal) and Katye Skrivan (four shots, three on goal) led the offensive attack for the Cougars that Filippone and the Lady Govs defense were able to hold at bay.

“I’m extremely proud of these girls,” said head coach Kelley Guth.  “Being able to go out there and grab six points on the road this weekend shows the tremendous growth and resiliency of this team. I was very impressed with the way they handled adversity this weekend.”