After weeks of discussion and debate, Scott Dehnisch and Sam Sells, both military liaison officers for USAID’s Disaster Assistance Response Team, Maj. Gen. Gary Volesky, the JFC-UA commander, Armed Forces of Liberia Capt. A. J. Halley Moore, the 1st Battalion commander, and D. Dorr Cooper, the mayor of Ganta, came to an agreement on the location of the much-needed ETU after discussions with local medical and health officials.

The need for an ETU in Nimba County, where Ganta resides, couldn’t be more palpable.

While the group discussed options for the future ETU, an ambulance sped past with drivers wearing full protective suits and masks. They were transporting an Ebola patient to their current makeshift ETU located in the city’s optometry clinic. Some members involved in the discussion had to step away to care for the new patient. 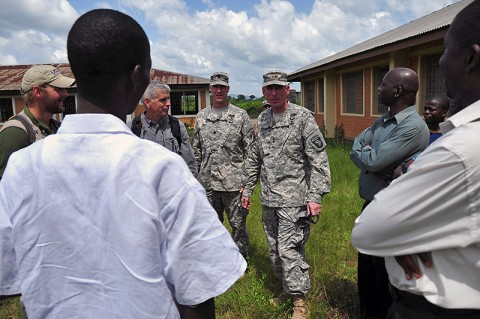 “We’re just trying to make sure we’re all on the same page with regard to where to put this [ETU],” said Dehnisch. “We would like to get started immediately due to the hot spot of an outbreak that is occurring now in Nimba County.”

There were two sites proposed to USAID by the Ganta city officials, said Dehnisch. Their primary site didn’t meet the minimum space requirements to allow for 100 beds, but they could retrofit it to accommodate more patients.

The alternate site would accommodate the planned capacity, but it would be farther away from the city and disrupt their current operations in the optometry clinic. 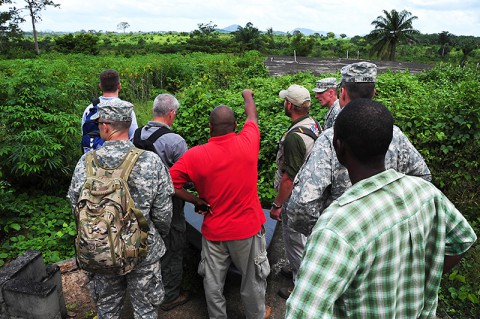 Collaboration between USAID, JFC-UA and AFL made this mission possible, said Moore, who once attended school in Ganta.

It was important to the officials that the person helping them make the decision could relate to the people who lived there, said Moore. There was an immediate rapport present that would have been difficult to build within such a short timeframe with anyone else.

Moore was able to better communicate why the alternate site necessary to ensure the community would be safe and the patients well taken care of.

Volesky also felt collaboration was the key to success in moving forward with the Ganta ETU.

“Everyone who needed to be there was,” said Volesky. “We had representatives from the Armed Forces of Liberia who was critical in enabling us to interact with community and all the other key players on the ground.”

Moore, who is highly appreciative of USAID and JFC-UA for their support, feels ETUs are the answer to stopping the spread of Ebola.

“Building ETUs is one of the few successful ways to contain and curtail the spread of Ebola,” said Moore. “So once those who are infected are isolated from the rest of the public, the easier it is to control.” 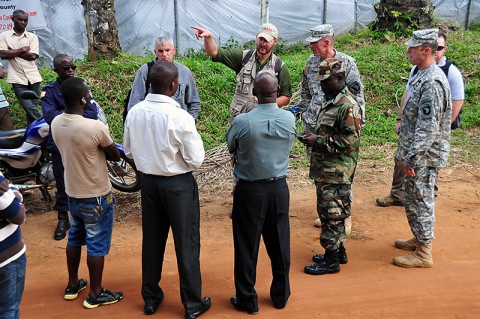 “The major theme of the Armed Forces of Liberia is to save lives in any way it can. So doing things collaboratively with USAID or the U.S. forces – it’s a good thing for anyone to be part of,” said Moore.

The meeting ended with an exuberant elbow bump – in lieu of a handshake – and an agreement between all parties to begin work the very next day.