The Soldiers completed 21 days of controlled monitoring at Joint Base Lewis-McChord as a precaution before they returned to their families and the Fort Campbell community to ensure they had not contracted Ebola during the deployment.

The Soldiers arrived shortly before 2:00am to loud cheers from friends and family members as they exited the plane.

After disembarking the plane, the troops formed up in front of Hanger 3 and Col. Edward Bailey, 86th CSH commander, and Command Sgt. Maj. Manuel Doyle, the senior enlisted adviser of the 86th CSH, uncased the unit’s colors.

After uncasing the colors, eager attendees inside the hanger shouted in unison, “Open those doors!” Soldiers assisting with the ceremony slid open the massive hanger doors and the returning Soldiers proudly marched in to the sound of thunderous applause. 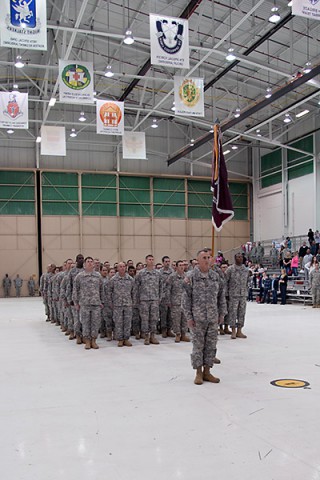 While deployed, each unit contributed to the success of Operation United Assistance, the U.S. Agency for International Development-led comprehensive effort to aid those affected by the Ebola outbreak in Liberia and surrounding areas.

To accomplish their mission the units built Ebola treatment units, trained medical workers in Liberia, carried out port operations and distributed supplies to sustain operations, in addition to many other tasks the units carried out while deployed.

The returning Soldiers represented a diverse mix of military occupations including everything from mental health specialists to military police.

Inside the hanger, Col. Steven Gilland, 101st Abn. Div. deputy commanding general of operations, told the returning Soldiers they had done a great job during their deployment.

After singing the 101st Airborne Division song and the Army song, Bailey released the returning troops for 15 minutes of family time. The orderly formation broke apart into happy chaos as spouses, children and other loved ones hurried to embrace their Soldiers.

Family members, despite some initial fears, were proud of what their Soldiers accomplished while deployed to Liberia. Claudia Seager said this was her husband’s third deployment, but she worried about him more on this deployment than on the other two.

“I was always afraid that he might catch Ebola virus and not knowing if he’s going to be hurt after that or what happens and that’s why to me it was the most terrifying one,” said Seager. However, as time went on and she found out more about the force protection measures used in Liberia to keep troops safe from Ebola she said her fears began to subside.

She said she was “very proud” of her husband and all they had accomplished during the deployment.

While happy to finally be home, many Soldiers also expressed how proud they were to be able to take part in the deployment, including Pfc. Ashley Campbell, a mental health specialist assigned to Headquarters and Headquarters Company, 101st Special Troops Battalion, 101st Sust. Bde., 101st Abn. Div.

Campbell said she was glad she was finally back at Fort Campbell and she would be able to celebrate her birthday at the end of March with her family. She also said that she was looking forward to going to Air Assault School.

“It’s great to come home to my family and my friends – I’m excited,” said Campbell. “Africa was a good experience … I was able to do my job as a behavior health tech, I got to experience a lot of things, meet new people from different duty stations, so I’m grateful I went on this deployment.”