Tampa, FL – With each passing day, the price of gasoline gets more expensive. In the past 20 days, gas prices have risen a total of 23 cents nationwide, 29 cents in Florida, 28 cents in Georgia, and 29 cents in Tennessee.

“Rising oil prices, increased demand, and reduced gasoline supplies have forced motorists to pay more money at the pumps in recent weeks,” said Mark Jenkins, spokesman, AAA – The Auto Club Group. “And it may not get any cheaper anytime soon. AAA forecasts that prices could rise a total of 30-50 cents by Memorial Day weekend.” 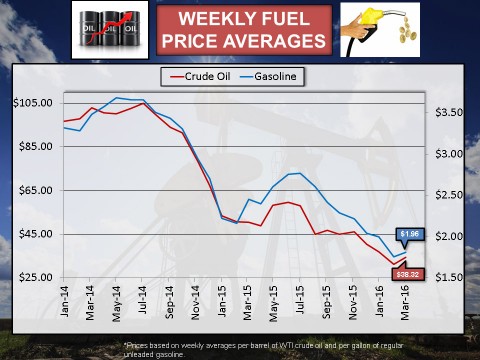 The graph at the top of this release shows a direct correlation between oil prices and prices at the pump.

Two-thirds of the price of gasoline is typically influenced by the price of crude oil, and the fact that oil prices have risen 28 percent in the past month explains why gasoline is also more expensive.

In fact, WTI oil reached its highest daily settlement of the year at $40.20 a barrel on Thursday. The weekly average price of $38.32 a barrel is the highest since the first week in December.

“Reported cuts in production and a weakening U.S. dollar are causing the global price of crude oil to move higher,” Jenkins continued. “Speculation about whether the price of crude has bottomed-out is ongoing and attention is once again being focused on an upcoming OPEC meeting scheduled for April 17th. During this meeting the cartel is expected to make a final decision on plans to freeze production at January levels, and if successful this may help reduce the market’s current oversupply.”

Crude oil however, is not the only factor pushing pump prices higher. An increased number of refineries began seasonal maintenance last week, thus reducing the supply of gasoline in the market, at a time when demand increases for the spring travel season.