The driver of a red truck, Joseph Karnes, a 24-year-old Waverly resident, has been arrested for Leaving the Scene of an Injury Accident and Vehicular Homicide.

Alcohol is believed to have been a factor.

Joseph Karnes was also charged with Non-Compliance With Financial Responsibility (Insurance Required). The suspect was incarcerated at the Montgomery County Jail without bond.

Additional charges may be filed in this case, pending blood draw results. 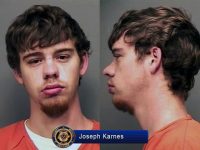