“As an artilleryman, it’s important for us to be able to support our maneuver brethren in the fight, wherever it may be,” Jenkins, said. “In order for us to provide timely, accurate, safe, fires, we have to go through a series of tables [performance tasks] to train up individually and collectively.”

The Red Knights battalion platoon-level artillery external evaluation, or Tables 11-12, is a twice-a-year exercise that concludes Friday. The training advances the battalion’s combat effectiveness and readiness. 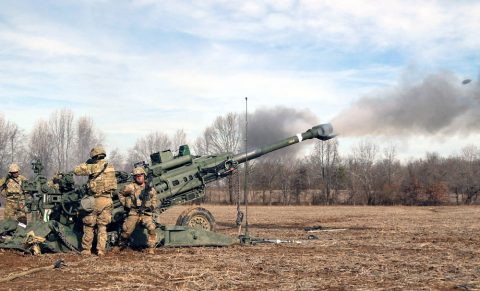 “Over the past several months, we’ve been working hard to build a “Fight Tonight” culture in the battalion,” said Lt. Col. Joseph A. Katz, 3-320th FAR commander. “That doesn’t just mean that we train hard and prepare to dominate our nation’s enemies, but it also means we’re building a unit mentality of Soldiers who know their job is to be prepared for anything, and who work to make it so.”

The training began January 22nd with an emergency deployment readiness exercise that tested the unit’s ability to deploy its personnel and equipment, both logistically and administratively. For Katz, the EDRE is an effective way for him and his staff to gauge the battalion’s ability to deploy on short notice.

“We go through and make sure our batteries [company-sized artillery units] know what equipment they need to take, know how to process all the paperwork, know how to ensure their Soldiers are deployable, know what to do to get everything ready for shipment,” Katz said. “Overall, it’s a fantastic learning experience for the unit because we don’t know what will fail until we attempt it.”

The Red Knights used the EDRE as the precursor for its EXEVAL that also included the battalion tactical operations center deploying to set up in a Fort Campbell training area. As with the Howitzer platoons, the target acquisition platoon conducted air assault operations to the field, moving its mobile radar systems equipment and personnel to the training area by helicopter to provide comprehensive observation and radar systems training in a tactical environment. 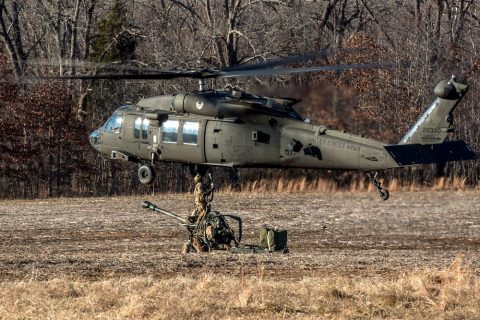 Six Howitzer platoons participated in the EXEVAL over three weeks, each conducting 48-hour live-fire missions in which they were tested on reconnaissance operations procedures, convoy tactical operations procedures, fire-mission processing and emergency mission processing. The platoons also were tested on occupation; putting a Howitzer into action from a stowed configuration. Platoons had to meet time standards throughout several of the tasks.

This was Pvt. 2 Zachary Marshall’s first actual air assault training mission outside of The Sabalauski Air Assault School. Marshall, a cannon crewmember with B Battery, 3-320th FAR, was part of an advanced echelon for an M119A3 Howitzer platoon, responsible for preparing the landing zone for helicopters to set down the platoon’s guns.

“Being ADVON is what I like most about this training,” Marshall said. “Being the first one in, I like the adrenaline rush and the challenge it brings.”

“The Table 12 EXEVAL is one of our most important training events because how we have been fighting the past few years is as platoons,” Jenkins said. “It’s very important for platoons to be able to operate independently. We’re running them through this and giving them external evaluation on the things that are going to be important in order to be successful in any combat situation.”

Chinook helicopters sling loaded the platoon’s three Howitzers to the landing zone, set them down gently, and released the slings. Marshall saw his gun was set down facing the opposite direction. It would have to be picked up by hand once the rest of his section arrived. In the meantime, he did what he could to configure the Howitzer so it was ready for its fire mission. The Chinooks soon returned with the remainder of the platoon.

“It was definitely heavy,” said Marshall, of lifting and turning his section’s Howitzer that was embedded in mud. “It weighs about 5,100 pounds.”

Eight to 10 artillerymen were eventually able to turn the gun in the proper direction. Simultaneously, the forward observers were sending in data to the fire direction center.

“The FDC crunch the numbers from the forward observers,” Marshall said. “Then they send down the fire mission to the guns.”

The platoon fired off four rounds into the Fort Campbell impact area.

“I love that loud explosion going off,” Marshall said. “If you pay attention, you can see the round leave the tube.”

The platoons worked long hours, conducting both day and night operations, in cold, wet and muddy conditions. Just the conditions that test Soldiers’ will to adapt and continue to perform their duties despite the challenges thrown at them.

“Tough, realistic training is how we ensure our unit knows how to do what they would need to do to fight tonight, and ultimately it makes us stronger Soldiers and more proficient artillerymen,” Katz said.