Clarksville, TN – The 2018 National Police Week (NPW) is May 13th through May 19th. The local Law Enforcement Memorial Ceremony will be held May 14th, 2018, 10:30am at Clarksville Police Headquarters, 135 Commerce Street. The public is invited to attend.

In 1962, President John F. Kennedy signed Public Law 87-726 designating May 15th as Peace Officers’ Memorial Day, and the week in which May 15th falls as National Police Week. 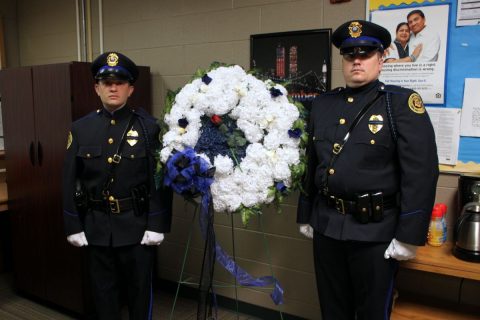 The law was amended by the Violent Crime Control and Law Enforcement Act of 1994, Public Law 103-322, signed by President Bill Clinton, directing that the flag of the United States be displayed at half-staff on all government buildings on May 15th each year.

While the actual dates change from year to year, National Police Week is always the calendar week, beginning on Sunday, which includes May 15th.

The Clarksville Police Department and Montgomery County Sheriff’s Office have had the following law enforcement officers die in the line of duty:

He died while investigating a fire at Clarksville Laundry on Third Street. One of the walls collapsed, killing him instantly. He was 35 years old at the time of his death and had been on the Police Department for 3 years. Officer Nipple was Clarksville’s first officer killed in the line of duty.

Officer Browning was shot and killed on Madison Street in front of the Post Office while responding to a call of a man with a shotgun. He was 38 years old at the time of his death and had been on the Police Department for 4 years.

King was killed while protecting his K9 Handler, Ralph Prost, during a search for burglary suspects in the New Providence area.

On November 5th, 1983, Officer Glenn was responding, on a motorcycle, to a domestic disturbance call. Officer Glenn struck the side of a vehicle that pulled out in front of him at “Magic Wheels Skating Rink”. He later died from the injuries sustained from the crash.

Officer David Scott died during a vehicle pursuit of a robbery suspect on the 101st Airborne Division Parkway.

Officer Baez-Santiago died during a vehicle pursuit of a robbery suspect on the 101st Parkway. He had been on the department about four months at the time of his death.

Also, let us take time to remember all the other officers who passed away over the years who dedicated their lives to serving our community.