Posted By Clarksville Online News Staff On Wednesday, November 28, 2018 @ 8:00 am In Education | No Comments

Clarksville, TN – Smartphone photos are fine for most tourists, but when Austin Peay State University (APSU) student Amir Elraheb first experienced the splendor of Madrid, Spain, he pulled out his watercolors to truly capture the city.

“It’s sort of like a photograph, but when you are painting you have to pay attention to the details of whatever you’re looking at so much harder, so scenes are engrained in my head,” Elraheb, an Austin Peay State University foreign language major, said. 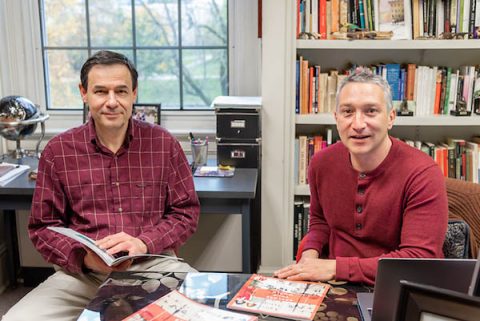 For many students, the experience of visiting another culture is best expressed through the creative arts – painting, poetry and essays – because their time abroad often shifts their view of the world, giving them a new perspective.

Earlier this year, a group of Austin Peay students and professors decided to compile these types of creative works into a new study abroad journal – “Explore Your World.”

“The main idea was to spotlight student creativity, and the second idea was to bring attention to study abroad at Austin Peay,” Dr. Sergei Markov, APSU professor of biology, said.

Last year, after reminiscing about his time on a fellowship in London, Markov remembered his former institution, DePauw University, published a study abroad magazine. He contacted two colleagues – Dr. Osvaldo Di Paolo Harrison, professor of Spanish, and Dr. John Steinberg, professor of history – who placed a high value on international experiences, and with a University Student Academic Success Initiative grant, the three professors began developing an academic and literary journal.

“We wanted to show what students accomplish in study abroad,” Di Paolo Harrison said.” We have essays, we have poems, we have short fiction. It’s just to show how people get inspired and touched and what they get out of it.”

“As former, current and future study abroad alumni, we can personally attest to the life-changing influence that these programs offer,” the journal’s editors’ note explains. “It is our goal to share these stories and pictures as seen through the eyes of our fellow students and esteemed faculty in order to stimulate a thirst for global travel and education.”

In addition to the creative works by students and faculty, the journal includes interviews with Elraheb and Dr. Marissa Chandler, director of APSU Study Abroad and International Exchange, and an overview of Austin Peay State University’s study abroad offerings in North, Central and South America, the Caribbean, Europe and Asia.

The publication also includes information on the Cooperative Center for Study Abroad, “a consortium of U.S. colleges and universities, which jointly offer study abroad programs in English-speaking regions.”

The professors and students are now in the early stages of developing a second issue of the journal, featuring new creative works and student experiences.

“We encourage students to send us their essays, their poems, whatever they create from their study abroad, so we can include them,” Di Paolo Harrison said.

To submit work, receive a copy of the current issue or for information, contact the professors at [2], [3] or [4]