Fort Campbell, KY – Leaders from across the 101st Airborne Division attended a Subterranean Training course hosted by the Fort Benning Maneuver Center of Excellence throughout the month of July on Fort Campbell.

The Chief of Staff of the Army has directed that the Army take a look at dense urban environments and dense urban terrain specifically, as it builds readiness to respond to contingency operations in any location around the world.

The MCoE teams explained how they analyze all aspects of this environment within megacities, to include subterranean systems. The subterranean operational environment, which dates as far back as the American Civil War, continues to be one that is complex and can create significant challenges for today’s Soldier. 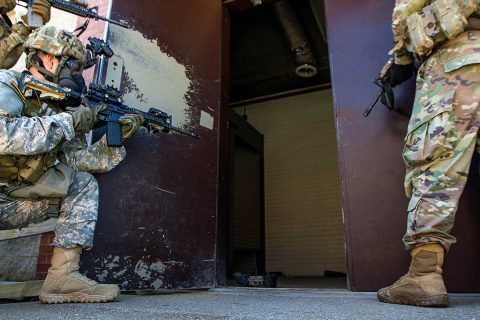 “We are here to make sure the leaders know how to operate in those subterranean environments,” said Capt. Grant Raber, Subterranean Mobile Training Team Operations Officer. “The Army is trying to be proactive with starting the training now.”

The MCoE sent teams of experts to instruct each 101st Airborne Division Brigade Combat Team during a week of one on one training. Each week began with classroom instruction, as leaders had the opportunity to learn how to properly maneuver a subterranean environment.

Before the hands-on portion, senior leaders were given the opportunity to attend the alpha course. There they learned the doctrine of subterranean warfighting.

“I attended the Alpha course which is designed for company commanders and up. At that course we learned the doctrine of subterranean warfare and we learned how to plan for these environments,” said Capt. Charles Bird, commander, A Company, 2nd Battalion 506th Infantry Regiment, 3rd Brigade Combat Team, 101st Airborne Division. “This course [Bravo] is between commanders down to squad leader, it’s designed for the clearance of the Sub-T environment.”

According to U.S. Army Training and Doctrine Command, the future operating environment is becoming more and more complex every day. Given population trends, future adversaries are expected to operate in dense urban terrain.

Dense urban terrains are characterized by dense populations and closely packed infrastructure, which could include subterranean features. Training Soldiers for this environment and providing them with the right mix of capabilities is essential to success on future battlefields.

“Everywhere you go in today’s environment, there are underground facilities,” said Bird. “We have to be prepared to fight anywhere, on or underground.”

The MCOE training teams covered some of the environments and obstacles U.S. forces are likely to encounter, such as an adversary seeking to exploit the subterranean domain through use of water, sewage, telephone, and other utility infrastructure to maneuver beneath a city.

“The instructors really did a good job setting up the training area to look like what it would look like while operating underground,” said Bird. “Now that we [the leaders] have this training, we have to go back to the unit and train the soldiers to feel comfortable operating in these environments.”