Baton Rouge, LA – The No. 5 Tennessee Vols suffered an overtime loss on the road Saturday against No. 13 LSU at Pete Maravich Assembly Center, 82-80.

A shot with 0.6 seconds left just missed and handed the Vols (24-3, 12-2 SEC) their second straight loss on the road. The Tigers (22-5, 12-2 SEC) were fueled by a raucous, sold-out crowd and the absence of SEC Player of the Year candidate Tremont Waters, who was out due to illness.

Javonte Smart stepped up big for LSU, dropping a career-high 29 points to go along with five rebounds, five assists and three steals. Skylar Mays chipped in 23 points as well. 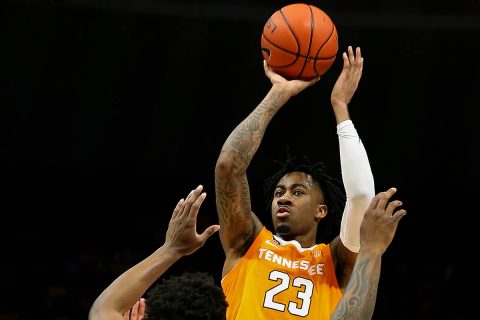 Admiral Schofield [1] was the leading scorer for UT with 27 points and nine rebounds. Grant Williams [2] added 18 points, nine rebounds and three assists. Jordan Bone [3], also battling illness, had 13 points to round out the Vols’ double-digit scorers.

Tennessee led for the entire second half, but the Tigers hung around. After going down by nine, LSU rattled off a 7-0 run to make it a one-possession game with 4:03 remaining.

A 3-pointer by Mays tied things up at 69-69 with 1:20 left. Mays then drew a blocking foul with 45 seconds remaining and converted both free throws to give LSU its first lead in the period. The Vols responded with Williams driving to the lane for an easy layup with 33 seconds left.

The Tigers then drove to the basket with nine seconds left, but Vols senior Kyle Alexander [4] rose up and blocked Smart’s attempt out of bounds. The Tigers had four seconds on the shot clock and were forced to take a quick three that missed the mark. The Vols had a chance to get a shot up before the end of regulation but turned the ball over.

The two teams swapped blows on both ends of the floor in overtime. After a Williams basket tied things up at 77-77, LSU called a timeout with 37.7 second left in the game and 24 seconds on the shot clock. Tigers freshman Naz Reid took the inbounds pass and drew a foul. The freshman forward missed the first free throw but hit the second to give the Tigers the lead.

The Vols answered once again by going to Williams, who got the basket and converted an and-one to give UT a two-point lead. However, the Tigers quickly went down and got two offensive rebounds before finally tipping a shot back in to tie things up. Tennessee went down and took a quick shot that hit off the front of the rim and then inadvertently fouled the Tigers. Smart went to the free-throw line and converted both free throws with 0.6 seconds left to seal the game.

Schofield had the hot hand shooting in the first half, leading all scorers with 13 points on 6-of-9 shooting. At the 9:15 mark, the senior guard helped halt LSU’s momentum by hitting four of UT’s next seven shots until the 2:30 mark in the period.

Tennessee ended the period on a 6-0 run to take a 36-31 lead into halftime. In the last eight minutes of the half, the Big Orange defense stepped up and held LSU to just 3-of-13 shooting from the floor. The Tigers were scoreless during the final three minutes.